Telehealth technologies and communications tools help keep a sense of normalcy for their clients. 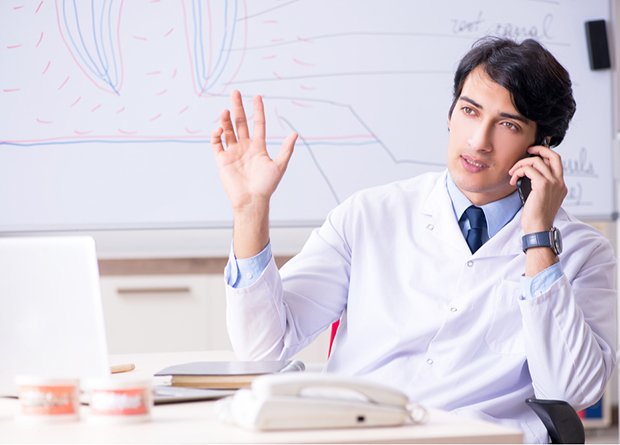 The doctor will see you now, virtually. Here is how Long Island orthodontists have adjusted to life with patients in quarantine.

So many Long Island businesses have had to adapt to the shelter-in-place orders and shut-down of non-essential businesses. While most medical practices could remain open, non-emergency dental treatment was deemed too risky to continue.

This put local orthodontists in a predicament. While no one would die if they missed their next appointment, orthodontics is an ongoing treatment process that requires adjustments, monitoring, and occasionally, a situation needs to be addressed immediately (think of those wires coming loose and poking the inside of your mouth.)

Luckily, orthodontists had options and they’ve been able to use them to “see” patients using what is called telehealth technologies, or in their cases, teledentistry.

“I guess initially it was a little bit of a shock as to how we were going to handle the situation because patients are in active treatment,” said Dr. Seth Kleinrock.

His practice, Kleinrock Orthodontics, has two locations, one is Hewlet and another in Long Beach. With over 1,500 patients in ongoing treatment, he said he needed a proactive plan to treat patients the best way he could.

He had to quickly figure out the most optimal way to care for his patients without actively seeing them. So, he began to reach out to them virtually through FaceTime, WhatsApp or other virtual consultation methods like having them upload photos of themselves to his website.

Dr. Kleinrock said continuing to see patients virtually had to accomplish two goals. The first was to create a sense of ease among his patients that he wasn’t going to abandon them.

“Patients felt they were being overseen and created some sort of normalcy in treatment without losing too much time,” he said. “They do appreciate that we are reaching out to them personally.”

The second goal was to prevent a huge rush of patients coming to the office once restrictions are lifted. Even in the early stages of opening up the economy on Long Island, social distancing will have to be respected as well as measures to protect both patients and staff.

“Because we are seeing patients virtually we are rescheduling them down the road,” he said. “They’re not going to be crashing the door.”

His staff will schedule follow up appointments six weeks after a virtual appointment. Whether or not those follow ups will be in-person or another virtual check-in is still an open question.

“Patients are confused and they have questions,” said Dr. Leon Klempner, a retired orthodontist who launched a marketing agency that advises orthodontic practices. “What’s going to happen to my kids' treatment? What should we be doing?”

Dr. Klempner once ran two ortho practices on Long Island. When he retired, he joined his daughter Amy Epstein, a marketing executive, to launch an agency called People & Practice that operates out of New York City and Setauket. The agency works with orthodontic practices nationwide.

From the beginning, People & Practice advised clients not to project that they are closing their doors but pivoting to a virtual model.

Instead of closing, Dr. Klempner said orthodontists should be offering to keep appointments to answer patient questions but move those visits online using a slew of available telehealth technologies geared to orthodontists.

He viewed the ramifications of cancelling appointments instead of enacting a virtual workflow as devastating. Similar to other non-essential businesses, people will want to rush to get their services as soon as possible after things open again. (Think haircuts.)

Telehealth, he said, can help to mitigate that problem too.

Dr. Boris Arbitman, of Arbitman Orthodontics said that it took a while before he realized that he might have to shut his doors.

“In the beginning I was in denial - as many of my colleagues were - about the whole thing,” said Dr. Arbitman who has offices in Howard Beach and Forest Hills in Queens.

But once the major sports teams started shutting down in mid-March it sank in that he might be next.

“The American Dental Association put out recommendations not to do any elective treatments,” he said. “At that point things turned a corner.”

Most of his colleagues closed. He didn’t want to.

People & Practice helped convince him that although he could not see patients in person there was an alternative that would work.

“I didn’t think the whole thing through,” he said. “I spoke with Leon and he said ‘You gotta be smart about this. The last thing you want to happen is for a patient to come down with Covid-19.’”

He worked with People & Practice to establish a new virtual workflow.

“They guided me the whole way through,” he said.

Taking People & Practice’s advice, the message Arbitman Orthodontics had to project was that although the office was physically closed, “we are here for you,” Dr. Arbitman said.

Dr. David Amram, a partner in Coolsmiles Orthodontics with offices in Port Jefferson and Medford, said the “happiness quotient” was important in deciding to go virtual.

“I do find that when I’m talking to these patients there are a couple of things I hear over and over,” Dr. Amram said. “One is relief that if there is a problem we are here for them and we do have options. They are also happy to progress in their treatment despite the fact that we can’t be with each other.”

He said there’s also the loneliness factor to consider. Human interaction has become just as important as treatment.

“I find myself talking about how we manage as parents,” said. “We’re all kind of commiserating.”

For Dr. Amram, when he had to close because of the pandemic the first reaction he had was fear.

“I think my gut reaction was fear because I was afraid for my staff, my kids and my family,” he said. “And it took me a little bit of time to realize when initially they said two weeks that it’s not really going away in two weeks.”

He took a two step approach to his plan. The first was to figure out how to reach out to patients and reschedule appointments. Second, was fact-finding mode.

“What are the requirements if we want to stay in touch, what is the value we can offer, and what technology is available.” he said.

Locking in the technology needed, doing the training with any software, and then tying all that into his existing patient database needed to be accomplished, and quickly.

“That was a bit of a headache,” Dr. Amram said.

The practicality of how to connect with patients was another matter to consider. What tools to use for existing patients, and what works for new patients who are considering treatment.

Dr. Kleinrock said he calls his patients directly for his appointments.

“I don’t always catch them at the best time,” he said.

Sometimes parents or kids are involved with meetings or schoolwork. Others, he finds not quite ready for the appointment.

“Some kids are still sleeping,” he said. “They get woken up to a FaceTime call.”

It might seem like an intrusion to virtually visit patients in their homes but Dr. Kleinrock says that it’s actually the opposite.

“In a way, I have built up a little more of a rapport with patients,” he said. “At home it’s a different dynamic.”

Dr. Arbitman had been hearing about teledentistry for months from People & Practice.before circumstances forced him to adapt.

“This put teledentistry on the fast track, he said.

While it will never substitute an in-office visit, Dr. Arbitman thinks it's a time saver that doctors and patients will want to integrate into their treatment programs.

In the last few years, a few direct-to-consumer orthodontics companies have cropped up but orthodontists and the organizations that represent them say that teledentistry and virtual appointments with your local ortho practice are not the same as those services - they’re not interchangeable.

Smilesnap is one of the technologies that orthodontists put onto their website for patients to consult with the doctors. Existing patients can upload photos of their teeth to be assessed about progress and new patients can submit photos, as well as communicate their concerns and get feedback from the doctor.

In either case, an in-person consultation would be required eventually.

Another system is called Dental Monitoring. They have two software platforms that allow for remote monitoring of existing patients and to provide virtual consultations for new ones. The company website says that it is offering lite versions of their apps and discounts during the Coronavirus pandemic to help orthodontists and their patients.

“There’s not a single good tech to make this easy,” said Dr. Amram of the teledentistry platforms specific for orthodontists.

Out of more than 2,000 active patients at Coolsmiles Orthodontics, Dr. Amram says 80% of them took advantage of his virtual appointment option. He also said that he’s had about eight to ten virtual new patient consultations since the shut down.

It will take an amalgam of technologies to help get the job done for most offices seeking to become more virtual, now and in the future.

“Some are focused on acquiring new patients,” Dr. Amram said. “That has some value but that’s not all encompassing. Other tech allows you to text and share photos within a dashboard but that’s not perfect for somebody seeking a consultation.”

Coolsmiles uses a company called Rhinogram to communicate with patients now, which is a HIPAA-compliant system to share photos and uses encrypted messaging for communication.

Dr, Amram said he likes Rhinogram because from the patient's perspective the communication looks seamless - like it comes directly from the doctor -  and he can use a dashboard to manage everything.

Of course the best kind of patient care is in-person, according to Dr. Kleinrock, but in the meantime virtual is working for him and his clients even if some consultations are trickier than others.

“I can deal with minor types of emergencies,” he said. “I can usually walk them through it.”

The future of orthodontics will have some hybrid of virtual and in real life appointments, according to most of the orthodontists interviewed. The coronavirus has been a trial by fire. Some cases might lend themselves to more virtual visits, like Invisalgin, where adjustments to hardware don’t need to be done in the office every time.

Dr, Amram of Coolsmiles Orthodontics thinks teledentistry will be a part of everyone’s practice moving forward especially as we phase-in the return of non-essential services.

“It wouldn’t be smart to have a super-packed waiting room,” he said. “If we want to social distance then a portion of my day will be dedicated to virtual treatments.”

In the meantime, patients have been happy with continuing to see their orthodontist virtually.

“They are thrilled we’re there for them,” said Dr. Arbitman. “During a time where they can’t get in touch with a person at a bank or insurance company, they can get ahold of me.”