DEC Issues Guidance to Homeowners to Avoid Problems With Bears

The New York State Department of Environmental Conservation (DEC) today issued guidance on how to prevent negative encounters with black bears. Nearly all negative bear encounters in New York are the result of hungry bears ... 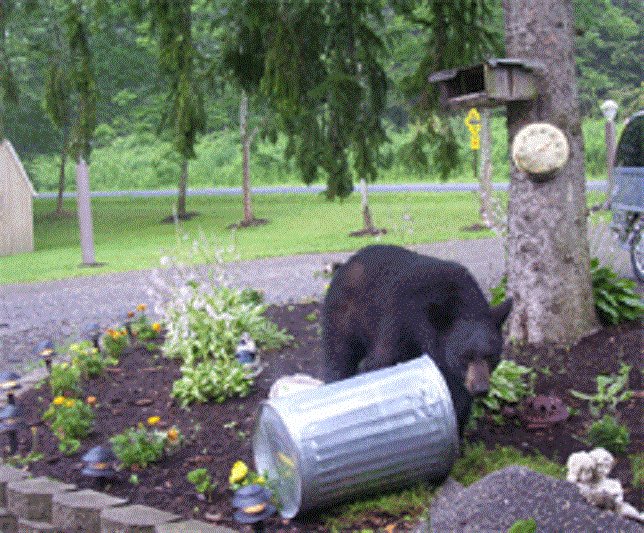 Warmer Spring weather is here, which means New York's Black Bears are on the move.

Albany, NY - April 22, 2016 - The New York State Department of Environmental Conservation (DEC) today issued guidance on how to prevent negative encounters with black bears. Nearly all negative bear encounters in New York are the result of hungry bears being attracted to human food sources. The simplest way to avoid a nuisance encounter is to remove potential food sources, which usually results in the bear moving on.

New York is home to between 6,000 and 7,000 bears that emerge from the winter denning period and need to replenish their nutrients and body fat. To do so, they may travel long distances to preferred habitats that vary from season to season. Bears must often cross roads or pass through developed areas to find these different habitat types, and they often find human foods readily accessible if homeowners do not take necessary precautions.

Not every bear that passes through a developed area is a problem bear, but readily available human food sources can quickly turn them into one. Bears can obtain all of the food they need from the forest but they are intelligent and opportunistic animals that will find and consume whatever food they can find most easily. Bird feeders, garbage cans, dumpsters, barbeque grills, unsecured out-buildings or vehicles containing food or waste are all potential attractants to bears.

Once a bear learns to obtain food from people or certain structures, it is very difficult to change the animal's behavior. These bears are more vulnerable to motor vehicle collisions in populated areas, more likely to be illegally killed, or may become a threat to public safety.

In some cases, DEC is asked to relocate these bears. However, bear relocations are rarely effective at solving the problem and can be dangerous. Relocated bears often return to their original capture site, or may simply continue their bad habits at a new location. Additionally, if the circumstances that led to the original problem are not corrected, other bears may be attracted to the site and the human/bear conflicts will persist.

It is dangerous and illegal to intentionally feed bears. The incidental, indirect feeding of black bears, such as with bird feeders or garbage is also unlawful.

Occasionally a bear becomes so habituated to human environments and conditioned to human foods that its behavior creates a clear threat to public safety and property. Extreme cases can result in requiring the bear to be put down to protect the public. It is in the best interest of both bears and people for bears to get their food solely from wild sources.

To reduce the chance of negative black bear encounters around your home, DEC recommends these simple precautions:

It is important to appreciate and respect black bears as wild animals, from a distance.

For more information about bears in your area or to report a problem with black bears, contact the nearest regional DEC office. For listings of Regional DEC Offices, visit the DEC website.