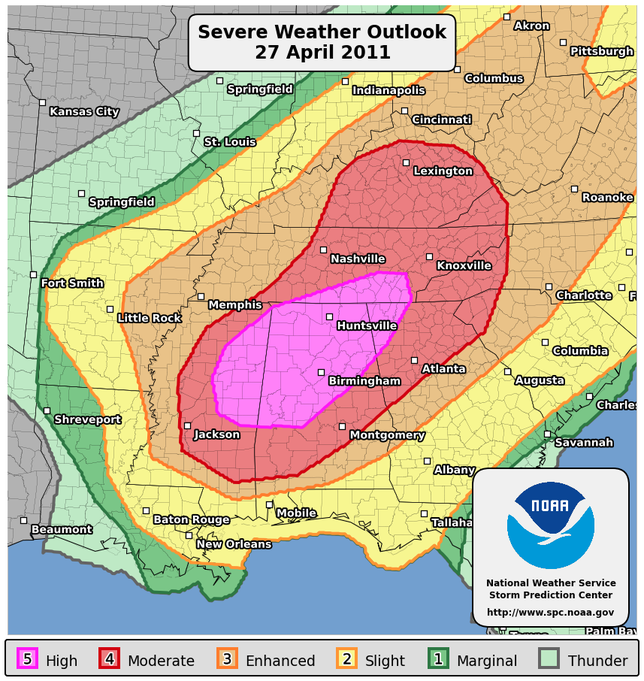 The National Weather Service’s Storm Prediction Center has proposed a slight design change to its severe weather warnings in order to better communicate the risk and likelihood of severe weather occurring.

Under the existing system there are four threat levels of increasing severity: See Text, Slight (SLGT), Moderate (MDT), and High. The proposed change would replace the See Text category with Marginal (MRGL) and add an Enhanced (ENH) section between Slight and Moderate. The Marginal label would also include a categorical line to better describe the specific weather system that the SPC is expecting, and the Enhanced category would replace upper-level slight risk possibilities that aren’t quite severe enough to be considered moderate.

Maps released by the NWS would also have a corresponding color to indicate each severity level, including the new ones. The images below illustrate the difference between the new proposed labeling system (left) and the maps currently in use (right).

The new system would help to better differentiate between different types of dangerous weather, such as a low end risk of tornadoes or thunderstorms, which are currently lumped into the same warning category. It would also add a contour to maps that indicates areas of marginal risk; under the existing system there is no colored indication for the See Text category.

Before going forward with the proposed changes, the NWS has initiated a 45-day public comment period, in which it is asking for feedback on the new maps and labels. Those who wish to comment can do so by filling out this survey before June 17, 2014.

If approved, the new system will go into effect 75 days after the issuance of a Service Change Notice, making September the likeliest time for the new categories to make their debut.