Vessel took on water after being pushed into rocks by heavy wind and seas on Smithtown Bay. 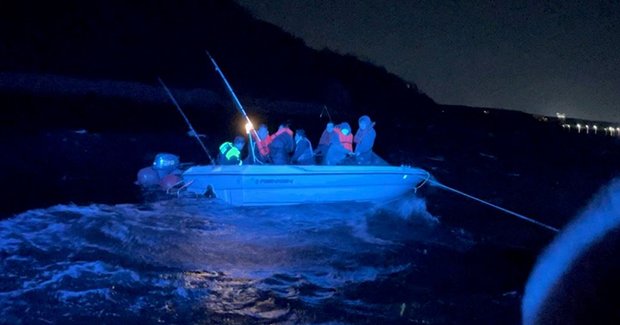 Six boaters found themselves in trouble on Tuesday night when their vessel was pushed onto the rocks by heavy sea and wind in Smithtown Bay. Smithtown Bay Constables responded to a distress call off the coast of Crane’s Neck and found the 18-foot boat was taking on water.

Smithtown Bay Constables Daniel Shannon, David Rosenberg and Sergeant Scott Roberts were able to navigate the rocky waters and extract the passengers from the disabled vessel onto their patrol boat. The Suffolk County Police Department Marine Bureau and Aviation Units also responded to the call.

Smithtown Town Supervisor Ed Wehrheim highlighted the efforts of Rosenberg and Robert for their part in rescuing the six boaters.

“This incident could have turned tragic for the victims had it not been for such an effective coordinated response by all agencies involved,” said Wehrheim.

The five men and one woman were found wet and suffering from exposure to the elements when first responders arrived on the scene. They were immediately returned to the Stony Brook Boat Ramp where EMS crews from Stony Brook and Setauket Fire Departments were standing by to evaluate and treat the victims.

“The vital caliber of communication, expertise and partnership that goes into a water rescue, under rough weather conditions like last night, is a true testament to the exceptionalism of our first responders, protecting our community every day," he added.