The United States Department of Veterans Affairs (VA) report that around 5.2 million adults have post-traumatic stress disorder (PTSD) during any given year. 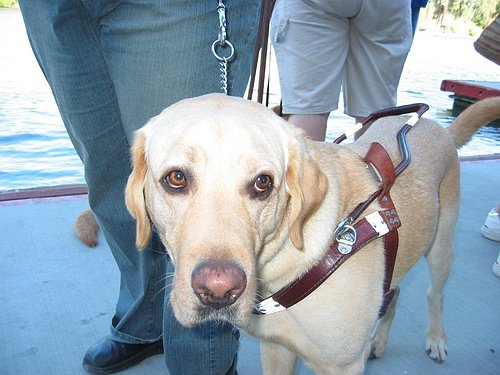 Smithtown, NY - October 29, 2014 - The United States Department of Veterans Affairs (VA) report that around 5.2 million adults have post-traumatic stress disorder (PTSD) during any given year. Today, between 11 – 20 percent of veterans who served in Operations Iraqi Freedom and Enduring Freedom develop PTSD. On November 11, 2014, a U.S. veteran will adopt a service dog, specifically trained by Guardians of Rescue to help people suffering from PTSD. The nation-wide animal rescue organization will unite the rescued and trained dog Cali with Army Sergeant Stephen Siwulec on Veteran’s Day.

“We’ve spent months training Cali, a lab mix rescued from a high-kill shelter, to become a service dog to help veterans suffering from PTSD,” explains Robert Missieri, founder and president of Guardians of Rescue. “This is the best part: when the dogs meet their new owners and the veterans begin to see the difference in their lives that the dogs can make.”

According to the VA, people suffering from PTSD can experience:

PTSD symptoms usually start soon after the traumatic event, but can continue on for months or years after the trauma. To help ease this suffering, Guardians of Rescue started the Paws of War program, which takes the time to rescue dogs and train them to suit the needs of those with PTSD before matching them to a veteran. Guardians of Rescue is a non-profit organization completely dependent on donations to support their programs.

“I’m thrilled to be provided the opportunity to help manage my PTSD. Ideally, my hope is that Cali will help me be able to go to the mall and large crowded areas by helping me with my nerves. Cali can help me get out of the house so I can go to the doctor and work,” says Sergeant Siwulec, a combat military police officer, who has been deployed to Iraq and Afghanistan. “Having Cali will give me a battle buddy that I’m accountable for, who I have to take care of.”

“Anytime that we can save both a veteran and a dog is an unbelievable accomplishment to us,” adds Dori Scofield, vice president of Guardians of Rescue. “The fact that it is Veteran’s Day makes the uniting of a veteran and dog all the more special. We’d like to ask everyone to continue donating to Guardians of Rescue so we can help more people like Stephen and more dogs like Cali.”

About Guardians of Rescue
Based in New York, Guardians of Rescue is an international organization whose mission is to protect the well being of all animals. They provide aid to animals in distress, including facilitating foster programs, rehabilitation, assisting other rescue groups and providing support to families, both military or not, who need assistance due to economic factors. To learn more about Guardians of Rescue, visit the site at www.guardiansofrescue.org.