Over 60 local veterans, representing three generations of American history, gathered today at the Northport American Legion Hall to witness the signing of two significant bills that many of them had a hand in crafting. 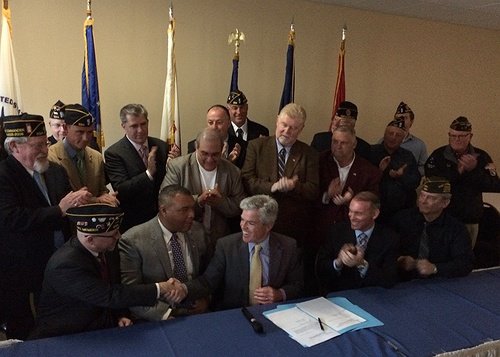 Northport, NY - April 20, 2015 - Over 60 local veterans, representing three generations of American history, gathered today at the Northport American Legion Hall to witness the signing of two significant bills that many of them had a hand in crafting. Signed off by Suffolk County Executive Steve Bellone, and sponsored by Legislator William R. Spencer, the complimentary laws will work to ensure that our veterans and their families will directly benefit from the charitable donations made in their name and penalize any person who impersonates a decorated veteran while soliciting funds.

“With more veterans than any other county in New York State, the men and women of Suffolk County who served in our armed services, and their families, need our support. These bills will play a role in that effort and will send the message to anyone seeking to take advantage of the goodwill of our residents and the valor of our heroes that there will be consequences,” stated Legislator William R. Spencer.

The first law, IR 1853, also known as the, Sunlight Law, will require nonprofit veterans’ organizations to disseminate pertinent financial information to the general public about how their dollars are being spent. The information will guide the decision making process when choosing how to donate their charitable dollars.

Working as a stand-alone law as well as in tandem with the Sunlight Law, IR 1041, also known as the Stolen Valor Act, makes it a crime for any person to fraudulently market themselves as a decorated veteran while soliciting funds and ensures that any organization in violation of this act will be out of business.

“If you asked the public how they felt about persons posing as veterans to raise money for their personal gain, they would say: there ought to be a law against that. Thanks to Legislators Spencer and Stern and County Executive Bellone, now there is. I commend them for this legislation and hope the Suffolk County law will serve as a model for others around the nation to make sure that no one improperly profits from the dedication, hard work and sacrifice of those who served our country,” said Huntington Supervisor Frank P. Petrone.

“As Chairman of the Veterans and Seniors Committee, it is a great privilege to serve those who have served us. To do so, one of our most important steps is to protect the honor and dignity of our service men and women that they hold so dear. I applaud my colleagues and veteran advocates in helping to ensure that those who have made these great sacrifices for all of us are assured the recognition they deserve,” stated Legislator Steve Stern.

“This legislation is a great example of veterans coming together with our committed legislators to protect the valor and integrity of those that served and that dedicated funds go to veterans that legitimately need assistance.  We care deeply about these issues and we are grateful for all of the time and commitment by Legislator William Spencer and assistance from Legislator Steve Stern,” stated Commander of Northport American Legion, John Cooney.

These local laws will not only signal to potential offenders that such disgraceful actions will not be tolerated, but will expedite justice on the local level. Together, veterans and Suffolk law-makers have made a difference in the lives of the men and women who have protected our country.