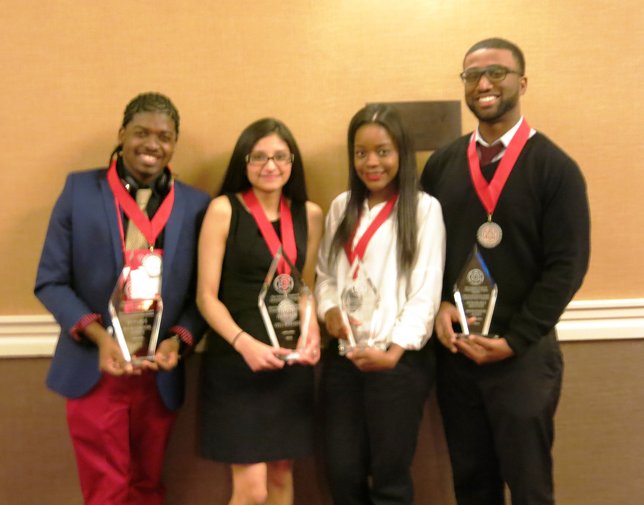 “The success of these students is quite an accomplishment and stands as further evidence of the strength of Old Westbury as it relates to teaching and research,” said College President Calvin O. Butts, III.

Old Westbury’s students were among the more than 600 students and staff associated with CSTEP at more than 50 colleges and universities across New York State who gathered recently in Bolton Landing, New York, for the conference.

In addition to presenting their own research, students participating in the conference had the opportunity to network with fellow CSTEP researchers, participate in professional and career development workshops, and listen to prominent speakers from various CSTEP targeted fields.

Highlighting the event is the annual awards banquet, where CSTEP researchers in the categories of Natural Sciences, Physical Sciences, Social Sciences, and Technology and Human Services celebrate the accomplishments of the student presenters.

Senior Prince Yearwood, a biological sciences major from Brooklyn, New York, took first place in the Environmental Science category for his research, titled “Are we slowly dying: The Effects of Bisphenol-A and 4-Nonylphenol in the Progression of Alzheimer’s Disease.”  In the same category, senior biological sciences major Maurice Chendron, of North Baldwin, New York, was awarded honorable mention for his project, “Elucidating the protective effect of Phenylmercaptoacetamide (PMA) to AS (V) toxicity in Caenorhabdites elegans.”

The Collegiate Science & Technology Entry Program (CSTEP), funded by the New York State Department of Education, is a program geared towards increasing the number of underrepresented students in the fields of science, technology and the licensed professions.