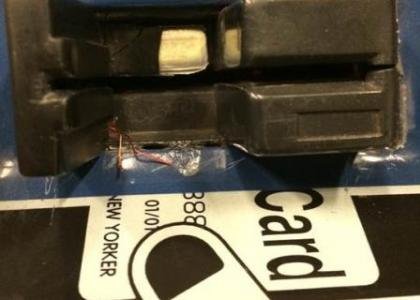 New York, NY - April 10th, 2014 -  MTA New York City Transit is asking customers to be vigilant when purchasing MetroCards at MetroCard Vending Machines (MVMs) after a skimming device and hidden camera were uncovered at an MVM inside the 59 St-Columbus Circle station (see photos below). The device was discovered last night around 9:30 p.m. attached to an MVM located on the north end of the southbound 1 platform at Columbus Circle.

An unidentified customer noticed the device, removed it from the machine and brought it to the Station Agent on duty. The New York Police Department is investigating the device.

New York City Transit urges customers who have purchased a MetroCard at that location using a credit or debit card to immediately check with their bank or credit card company to determine if their accounts show any signs of unauthorized activity.

“We have already dispatched personnel to check all MVMs system-wide today for other devices,” said MTA New York City Transit President Carmen Bianco. “As was the case yesterday, we continue to ask our customers ‘If You See Something, Say Something,’ particularly if they notice any suspicious activity or device in our system.”

MTA New York City Transit will also develop a public information campaign to remind customers to be on guard when purchasing MetroCards at MVMs. The best way to avoid fraudulent activity is to sign up for the EasyPay MetroCard. The EasyPay MetroCard is linked to your credit or debit card, and refills automatically as you use it.

EasyPay customers never have to make a purchase at a MVM and have the added convenience of using automated telephone service or www.easypaymetrocard.com to track their account 24/7.