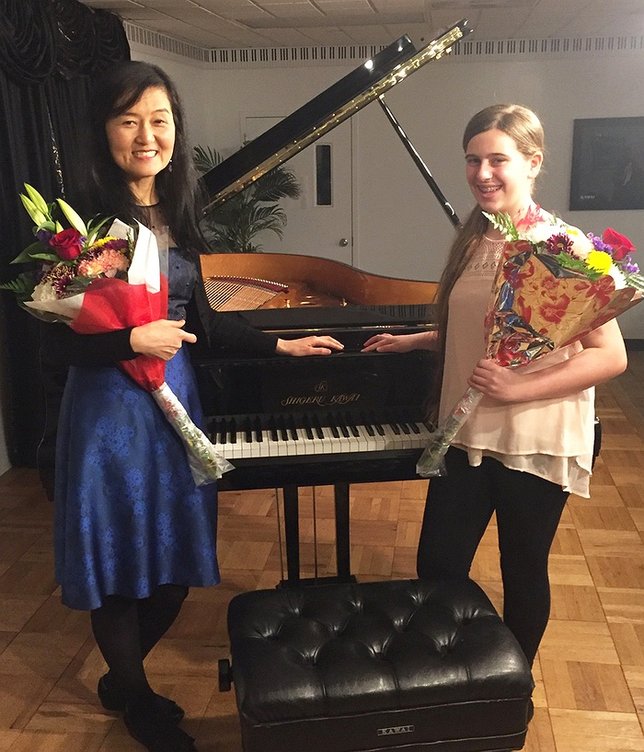 The class, which took place at Frank & Camille’s Melville piano showroom, was attended by numerous piano instructors and community members from Suffolk and Nassau counties. One of only two students from Long Island who were invited to participate, Gianna performed Rachmaninoff’s Prelude in C# minor, Op. 3 No. 2.

“I chose Gianna to participate in this event because I knew those who listened to her playing would appreciate her talent, and that her enthusiasm and thirst for learning would make her an ideal participant for this master class,” said Donna Siani, Gianna’s piano instructor and music teacher at Harbor Country Day.

“Her love for music was clear at a young age, when she was my preschool music student at Harbor Country Day, and she has shown such tremendous growth as I’ve been teaching her privately over the past six years. I look forward to her many successes to come.”

In addition to her piano instruction, Gianna is a member of the Metropolitan Youth Orchestra Concert Choir and will be participating in New York State School of Music (NYSSMA) on voice as well as piano. She was a member of Harbor Country Day School’s spring musical last year and will play the lead role of Martha in this year’s musical, We the People.

“Gianna is a gifted young woman who truly deserves this honor,” said John Cissel, Harbor Country Day Head of School. “In everything she does, Gianna carries herself with such grace and poise. All of us at Harbor are incredibly proud to see her talent being recognized in this way.”
-more-

Japan-born pianist Junko Ueno Garrett is known around the world for the colorful tone with which she plays, as well as her wide range of repertoire and her expressive, dynamic technique. She trained at the prestigious Toho Gakuen School of Music in Tokyo and received a Doctor of Musical Arts Degree from Rice University’s Shepherd School of Music. Her recent engagements include recitals at the Kennedy Center, the United Nations and Stony Brook University’s Charles Wang Center. She lives in Los Angeles and holds a faculty position at Occidental College.

About Harbor Country Day School
Founded in 1958 by conscientious parents, Harbor Country Day School is an independent, co-educational day school for children from preschool through 8th grade situated in St. James’ Village of Head of the Harbor. The school employs a whole-child approach to education, wherein its rigorous curriculum is supported by a broad program in its academic, athletic, advisory, and visual and performing arts departments designed to develop all aspects of each child's talents and interests.

Harbor Country Day School’s summer camp program, Camp Harbor, is among the leading summer camp programs on Long Island. The school’s mission to “cherish childhood, cultivate wonder, and inspire confident learners and leaders” underscores every child’s experience at Harbor Country Day School and ensures that all of its graduates are prepared to lead fulfilling lives filled with wonder, confidence, and many successes.

Harbor Country Day School is chartered by the New York State Board of Regents and is accredited by and a member of the New York State Association of Independent Schools (NYSAIS).  It is a non-sectarian, nonprofit organization under section 501(c) (3) of the IRS Code governed by a self-perpetuating board of trustees.  For more information, please visit their website.