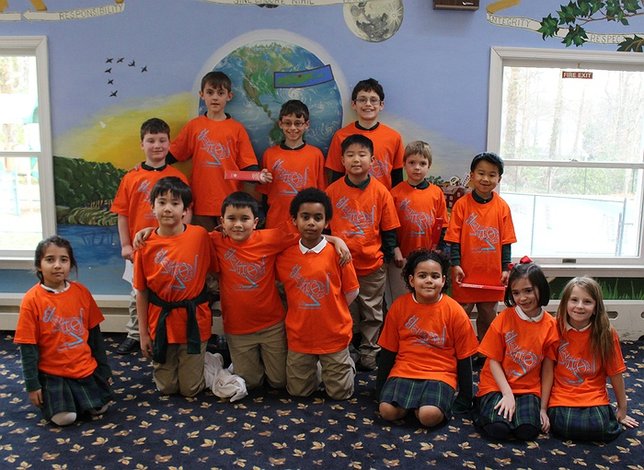 Saint James, NY - March 24th, 2016 - Fourteen students from St. James’ Harbor Country Day School participated in the worldwide Kangaroo Math Day competition on March 17, 2016. The math competition, which takes place around the world on the third Thursday in March every year, is open to students in first grade through twelfth grade and tests students on concepts such as logic, mental flexibility, pattern predictions, reasoning, critical thinking and problem-solving.

This was the school’s second year participating in the program. The number of Harbor Country Day participants, who ranged in age from first graders to eighth graders, doubled over last year.

“At Harbor Country Day, we believe it’s important to present our students with opportunities that not only challenge them, but inspire them as well,” said John Cissel, Harbor Country Day School’s Head of School. “We find that a little healthy competition, such as the Kangaroo Math Day, addresses both sides of the coin. The children love the challenge of the exam, and they are inspired to represent themselves and their school to the best of their abilities.”

Mr. Cissel continued: “The program fits our philosophy at Harbor because of the emphasis on critical thinking and problem-solving. And, of course, with the significance of mathematics in today’s world, we’re thrilled to see so many of our students getting excited about a math competition.”

The competition began in Australia in the 1980’s as a way to encourage greater commitment to the study of mathematics by presenting students with math problems that are interesting to them and by rewarding their efforts. As the exam became more popular throughout Europe, it came to be known by the name of “Kangaroo” in homage to its Australian origins.

The original test included engaging and thought-provoking questions that drew upon students’ understanding of algebra, geometry and logic. Today’s exams follow the same vision and methodology as the original exam.

The Kangaroo Math Day has rapidly grown in popularity in recent years, as an increased emphasis is being placed on the importance of mathematics in elementary and secondary curricula around the country. In 2014, 16,749 students in the United States participated in the competition; in 2015, that number grew 20% to 21,059.

About Harbor Country Day School
Founded in 1958 by conscientious parents, Harbor Country Day School is an independent, co-educational day school for children from preschool through 8th grade situated in St. James’ Village of Head of the Harbor. The school employs a whole-child approach to education, wherein its rigorous curriculum is supported by a broad program in its academic, athletic, advisory, and visual and performing arts departments designed to develop all aspects of each child's talents and interests.

Harbor Country Day School’s summer camp program, Camp Harbor, is among the leading summer camp programs on Long Island. The school’s mission to “cherish childhood, cultivate wonder, and inspire confident learners and leaders” underscores every child’s experience at Harbor Country Day School and ensures that all of its graduates are prepared to lead fulfilling lives filled with wonder, confidence, and many successes.

Harbor Country Day School is chartered by the New York State Board of Regents and is accredited by and a member of the New York State Association of Independent Schools (NYSAIS).  It is a non-sectarian, nonprofit organization under section 501(c) (3) of the IRS Code governed by a self-perpetuating board of trustees.  For more information, visit www.hcdsny.org.