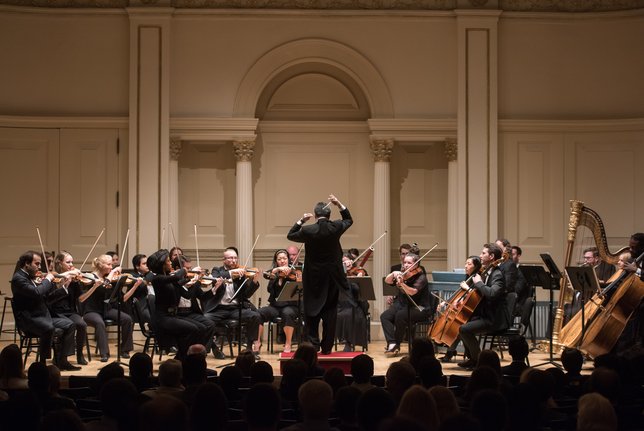 Garden City, NY - March 30th, 2016 - Adelphi University Performing Arts Center (AUPAC) is pleased to announce that the acclaimed Chamber Orchestra of New York will return on Saturday, April 16, 2016, at 7:30 p.m. on the Westermann Stage of the Concert Hall at 1 South Avenue, Garden City, NY with a festive concert featuring music from the movies.

The orchestra’s program will feature music from Ennio Morricone's Cinema Paradiso, on the occasion of the 25th anniversary of the American release of the film, and Gabriel's Oboe from the film The Mission. The evening will also include works featured in films such as Debussy's Clair de Lune (from Oceans 11), Puccini's O Mio Babbino Caro (from Room with a View), Corelli's Christmas Concerto (from Master and Commander), Mahler's Adagietto (from Death in Venice), and Dances (from The Leopard).

AUPAC is one of Long Island’s premier cultural arts venues for entertainment of all kinds. Tickets are currently on sale and are priced at $40/$35, with discounts available to seniors, students and alumni.

Information is available at the Lucia and Steven N. Fischer Box Office at 516-877-4000 or boxoffice@adelphi.edu. Regular box office hours are Tuesday through Friday from 1:00-6:00 p.m.

The box office is also open two hours before most scheduled performances.