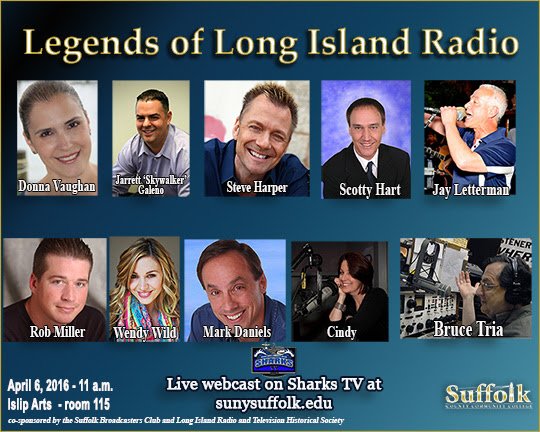 Islip, NY - March 28th, 2016 - A first-of-its-kind gathering of 10 radio icons that have helped shape Long Island’s broadcast landscape and whose voices are known to generations of listeners will share their unique experiences with Suffolk County Community College students and the general public on April 6, 2016 11 a.m. at the college’s Islip Arts building room 115.

The Legends of Long Island Radio will gather Long Island radio royalty on the College stage to share stories, discuss the Long Island radio and broadcast market and field questions from students and the general public. The event will be webcast live from the college’s website at www.sunysuffolk.edu .

“Our guests will trace the evolution of Long Island broadcasting from a smaller radio market to one of the largest markets in the country, said Assistant Academic Chair and Professor of Radio and Television Production Alan Bernstein. “Long Island’s growth has coincided with many stations evolving from ‘mom-and-pop’ operations to part of large station groups owned by major corporations,” Bernstein added.

The event is co-sponsored by the Suffolk Broadcasters Club and Long Island Radio and Television Historical Society.

Gathering on the college stage will be:

Rob Miller -  Rob just hit the quarter century mark in the radio and entertainment industry, all working for the same company, which is now iHeartMedia.  Rob has always called Long Island home and started his career in 1990 as an intern at Long Island’s top rated WALK 97.5.  During his 18-year-run at the station, he worked his way up from on-air personality to being the station’s head of programming for seven years.

In 2006, the opportunity of a lifetime came when Rob was elevated to Program Director at 103.5 KTU in New York City, the most listened to Rhythmic Top 40 radio station in America with over 4 million listeners.  In addition to day to day programming at KTU, Rob is the iHeartMedia Hot AC Brand Manager and is directly responsible for the content on more than 40 radio stations across the country in markets from Los Angeles to Miami to Chicago.

Wendy Wild - currently heard middays on 103.5 KTU, ‘The Beat of NY’ Wendy also lends her voice to Mix 106.1 in Philadelphia, and Nick Radio (heard nationwide on iHeartRadio). Wendy’s ‘What’s up with Wendy’ segment airs weekends on The Weekend Throwdown with Jagger, a nationally syndicated program with approximately 35 affiliates and counting. She provides various voice-overs for commercials, promos & programs such as The Weekend Top 30 Countdown.

Mark Daniels - in his 31st year at WALK-FM as morning co-host, Mark began his career in radio in 1974 at SUNY Cortland’s WCSU where he attended classes. In 1978 he began his commercial career at a small upstate NY radio station.  Two years later, he moved to Florida and spent six years on the air in Daytona Beach

Cindy - a proud Suffolk County Community College alumni, Landing her first radio job as a copywriter/producer just two months after graduation, she went on to carve out a rewarding career as a voice actor.  Keeping connected to her radio peers, she was invited to join WALK 97.5's morning show and a decade and a half later, is the latter half of "the WALK Breakfast Club with Mark and Cindy"

Donna Vaughan - joined WALK in 1995 as News Director and a member of the WALK Breakfast Club morning show. She’s now also heard on WALK’s sister radio stations in the Connoisseur Long Island radio group, including 103.1 MAX FM and 1100 AM WHLI.

Jarrett "Skywalker" Galeno - as of 2015 Skywalker reached the pinnacle of his broadcast career by joining CBS radio and 92.3 AMP in the largest market in the country; New York City. Skywalker’s greatest professional achievement is his show on WSPK K104.7, the #1 most listened to radio station in the Hudson Valley for the past 15 years.

Steve Harper - Steve’s career began at age 17 on a Long Island AM station, where he became the youngest afternoon drive announcer in the U-S. From there it was onto Long Island’s WBLI, where he reined for over two and a half decades.  He has hosted many local television shows and appeared in numerous television productions.  Steve is currently host of the morning show at Long Island's K-98.3

Bruce Tria - After taking some communications classes at Suffolk Community College, opportunity knocked in the form of WLNG and Bruce has been in broadcasting since Christmas Eve, 1976. He has never done anything else for a living.

After WLNG, Bruce joined WRIV in 1979, first as a disc jockey who also had advertisers on-the-air, then as the Program Director and Station Manager before spending two years in the 80's at WGLI in Babylon. An owner of WRIV since 1988, he has done the morning show on and off since 1990.

Jay Letterman - Jay Letterman aka Charlie Lombardo celebrates 32 years in Long Island radio this year. He is the Senior Vice President of Programming for JVC Broadcasting & oversees the stations here on Long Island, West Palm Beach, Gainesville and Ocala, Florida. Charlie has been up and down the dial and spent time at WALK, KJOY, WRCN, Island 94.3 Love 96.1 and a jock at Sirius/XM where he hosted their love songs channel, Starlight.

Scotty Hart - Scotty Hart has been involved with Long Island radio and television for 35 years. His radio experiences began as a remote engineer for WLNG, Sag Harbor in 1981.Then over the years included on-air talent and engineering duties on WLNG, WRIV, B103, WMJC, WKJY, and WNEW (Mix 102.7) in New York City. Since 2005, Scotty launched and maintains WLIX radio in Suffolk County.  Formats including Alternative "RadioX", Christian "Voice Of Hope", and the current Classic Adult Contemporary programming.