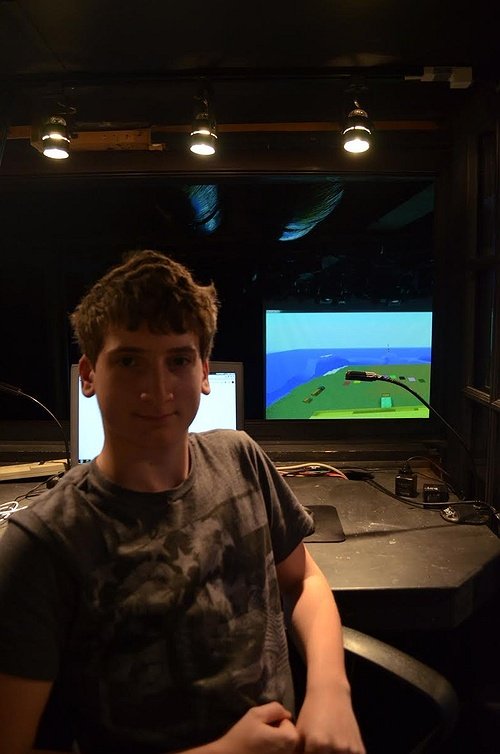 Sag Harbor, NY - March 24, 2015 -  Bay Street Theater is excited to announce that the first ever MINECRAFT ADVENTURES AT BAYSTREET,  hosted by teens Mason Cohen and Miller Croke, to be held on Sunday, April 12 from 2 pm to 4 pm. Students aged 11 and up are invited to take part, but reservations are required and can be made by calling the Bay Street Theater Box Office at 631-725-9500, open Tuesday through Saturday 11 am to 5 pm or by emailing syoung@baystreet.org .  Only the first 10 students will be able to participate, but the afternoon will be open to anyone who wishes to watch how it all works—parents and students alike. A suggested donation of $10 per participant will be requested.
MINECRAFT ADVENTURES AT BAYSTREET is the first event of its kind on the East End. The first 10 kids to register will join together via their own laptop computers, and will ‘appear’ on Bay Street’s large film screen as a character. After logging into a secure server as directed by the student ‘hosts’, the gamers will  embark on a custom Minecraft journey in a unique world created just for Bay Street Theater, which will then appear on the big screen. Participants will race to complete various tasks and challenges including ‘farming, mining and exploring’ in a custom world displayed for all to see. Parents can rest assured that the content is safe, and that the tasks and scenarios found within this ‘world’, will be fun, sometimes humorous, and lacking only in the violence commonly found in today’s gaming marketplace. Participants will need to bring their own fully charged laptop, must be 11 years old or older and should have prior experience playing in a variety of Minecraft environments. They will need to have a purchased Minecraft account and have previously downloaded a game launcher onto their laptop. Parents, siblings, and friends are encouraged to come and watch the fun … and learn a little about the Minecraft mania that has swept the county.
Hosts Mason Cohen (8th grader at Pierson) and Miller Croke (8th grader at Southampton) are uber-techy, creative storytellers who together have been creating worlds and hosting private Minecraft events for the past two years.
Mason’s mom, Joyce Shulman, brought her son’s skills to light during a meeting with Bay Street Theater’s COmmunity COnnections COuncil (3CO) on which she serves, a group of residents who work with Bay Street’s management on initiatives related to the “Center for the Arts” side of Bay Street’s expanded brand and mission.  When discussions turned to kids and gaming, Ms. Shulman’s experience  as both mother of a teenage gamer,  as well as her role as CEO of MacaroniKid.com, brought the Minecraft ‘amazing race’ idea to light, and the new program kicked into high gear with Mason instructing the adults on how it might work.

“Since this is the very first time we’ve done anything like this before, we are considering this day a beta test of sorts,” explains Bay Street Executive Director Tracy Mitchell. “The 3 CO committee was charged with helping us expand on the notion that the “Center for the Arts that has a little something for everyone”, and so a new teen or kids program that wasn’t being offered on the East End seemed like an interesting concept.  And this is exactly the kind of programming we had hoped would arise from our work together.  If it’s a success, we will certainly look to expand it to other age groups and ‘worlds’—as I’m told there are plenty still to explore. ”
Reservations for MINECRAFT ADVENTURES AT BAYSTREET can be made by calling the Bay Street Theater Box Office at 631-725-9500, open Tuesday through Saturday 11 am to 5 pm or by emailing syoung@baystreet.org.
Bay Street Theater & Sag Harbor Center for the Arts is a year-round, not-for-profit professional theater and community cultural center which endeavors to innovate, educate, and entertain a diverse community through the practice of the performing arts. We serve as a social and cultural gathering place, an educational resource, and a home for a community of artists.