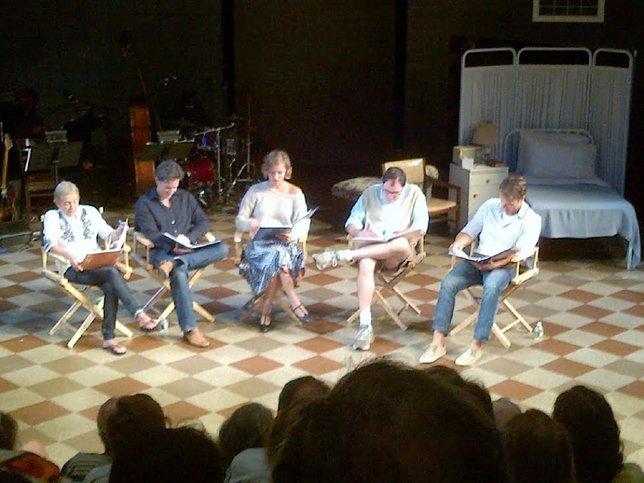 Sag Harbor, NY - April 7, 2014 - BAY STREET THEATRE NEW WORKS FESTIVAL will take place on April 25-27 at the Bay Street Theatre on the Long Wharf in Sag Harbor, NY. The Festival is produced in Association with SPACE on Ryder Farm. The media sponsor for the festival is Dan’s Papers Literary Prize Contest.

The three day festival will include readings of new plays by some of New York’s most exciting emerging playwrights.  The focus of the festival is to give the playwrights a chance to hear their works in development in front of an audience and to give the audience at Bay Street and East End Community a chance to experience cutting edge voices in the theater.  Each reading will be followed by a talkback with the audience.  The plays in the festival will be Fight Call by Jess Brickman, The May Queen by Molly Smith Metzler, and The Orchard Play by P. Seth Bauer.

There will also be an Artist Interact – a panel discussion with the authors, led by award winning writer John Weidman, which will explore what it means to be a playwright working today, and the way in which new work is created and developed in the theater.  The panel will be followed by a cocktail reception at Bay Street where the audience can meet the writers and other artists involved with the readings.

The Bay Street New Works Festival is co-curated by Scott Schwartz, Artistic Director at Bay Street Theater, and Emily Simoness, Executive Director at SPACE on Ryder Farm. The three readings will be complimentary for the Bay Street audience. Call the Box Office at 631-725-9500 to reserve a spot. The panel discussion and cocktail reception will be a $20 ticket. For advance tickets for the panel & party, call the Box Office at 631-725-9500 Tues. – Sat. 11 am – 5 pm.

In addition to the performances at Bay Street, this Festival also offers two of the playwrights the opportunity to present a reading in New York City at Ars Nova. Jess Brickman's FIGHT CALL will be on Wednesday the 30th of April and a second reading still to be determined will be on Thursday the 1st of May. Both readings are open to the public and will take place at 7 PM at the ARS NOVA loft (511 W 54th St, New York, NY 10019).

Scott Schwartz, Artistic Director at Bay Street says, “I am pleased to open the 2014 season at Bay Street with our first annual Bay Street New Works Festival.  We are deeply committed to new work at Bay Street, to helping develop the classics of tomorrow, and to giving our audience the chance to see theater you can’t see anywhere else.”

FIGHT CALL by Jess Brickman. A promising young actor and a stage veteran test the boundaries of trust when one of them threatens to commit an act of real violence on stage during a performance. A backstage comedy about theater, love and getting on.

JESSICA BRICKMAN'S plays include: The Insomnia Play (EST/Babel), The Twelve Positions of Hysteria, Third of May (Juilliard), Free Fall (Lyric Hyperion), In Loco Parentis and The Little Street. She has received readings and workshops at Lincoln Center, The Lark (Playwright's Week), Rattlestick, SPACE, EST and Weds at 8.  As a writer Jess has also worked in film (Somebody’s Wedding for Reveille/NBCUniversal) and television (Alternative, (original pilot, Fontana/Levinson), Studio 60, Dirty Sexy Money and The Bedford Diaries).  Her films, The Five Stages of Grief and I Am Not A  Moose, premiered at Lincoln Center and were official selections at many festivals during the 2013 season including Hamptons, Palm Springs,  Gotham (Best of Fest), Atlanta, Nashville, St. Louis and the LA Comedy Fest.  She has also directed many web series and online pilots including: The Newlymovedins, Couch Hoppers, Premature and Babytalk. As a journalist Jess has written essays and articles about business, film, love and family. She is a graduate of Yale University and Juilliard’s Lila Acheson Wallace American Playwrights Program, a recipient the Lecomte du Noüy award and a proud member of the nonprofit Voices of Rwanda.

THE ORCHARD PLAY, by P. Seth Bauer, is a contemporary re-envisioning of Chekhov’s A Cherry Orchard set on a Pennsylvania farm that has been in the family for generations. For a hundred and fifty years, the Olson family has tried to keep up with the times and have faced down famines, the Depression, and any number of wars.  Only this time, they face natural gas drilling, global warming as they struggle to preserve their way of life.

P. SETH BAUER plays include: Early in the Mourning, The Lysistrata Project, The Karma Cookie, Over the Line, Dahlia, Iphigenia, The Umbrella Play, The Burglar of Suburbia, The Tip, numerous one-acts and the book to the new musical Leading Lady. His works are published by Dramatists Play Service, Smith and Krause, Samuel French and New York Theatre Experience.  He teaches playwriting at The University of the Arts.

THE MAY QUEEN, by Molly Smith Metzler, starts when former May Queen Jennifer Nash suddenly resurfaces in her hometown, no one is more excited than Mike Petracca, a high school flame who still carries an obsessive torch for the beauty. But when their reunion turns out to be a FAR cry from what he expected, Mike is forced to see his golden May Queen-- and himself-- with new eyes. A searing comedy about the roles we play in each others' lives.... whether we know it or not.

SPACE on Ryder Farm is led by founding Executive Director Emily Simoness.  This emerging player in the theater community provides writers and theater companies with residencies on the property of the oldest operating farm in Putnam County. Ryder Farm has been in the Ryder family since 1795 and was a pioneer in America’s green movement by becoming one of the first farms to go organic in the 1970s. SPACE sources the majority of the prepared seasonal meals directly from the organic produce at Ryder Farm.

For more information about Bay Street Theatre log on to www.baystreet.org. Bay Street Theatre is a year-round, not-for-profit professional theater and community cultural center which endeavors to innovate, educate, and entertain a diverse community through the practice of the performing arts. We serve as a social and cultural gathering place, an educational resource, and a home for a community of artists.