$65 Million Initiative Outlines Multi-Year Plan To Restore and Transform Historic Park, Creating More Than 620 Jobs - Public to Have Opportunity to Review and Comment on Proposal. 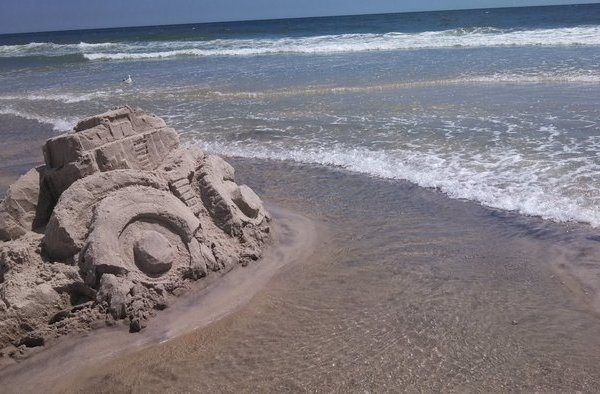 Wantagh, NY - March 20th, 2014 - Governor Andrew M. Cuomo today announced the Jones Beach Revitalization Plan to promote the restoration and transformation of one of New York’s most beloved state parks. The project aims to bolster the region’s tourism industry and enhance the quality of life vital to attracting and retaining businesses on Long Island. In commemoration of Jones Beach’s 85th anniversary, the Revitalization Plan will focus on restoring historic and aesthetic grandeur, strengthening storm resiliency, expanding recreational opportunities, and streamlining park entry, all of which will improve economic development and increase visitation to the park.

“My Administration is devoted to restoring our State park system – a commitment demonstrated by the $265 million in capital improvements we invested in just the last two years alone,” Governor Cuomo said. “The Jones Beach Revitalization Plan is one of our most historic projects and it will help to grow our tourism industry and help bring jobs to Long Island communities. We are excited to offer New Yorkers the opportunity to enjoy and explore the new Jones Beach for generations to come.”

Over the next five years, the $65 million Jones Beach Revitalization Plan will consist of capital improvement projects funded primarily through the NY Works initiative, which to date has already invested $265 million into the State Park system with an additional $90 million proposed in the 2014-2015 Executive Budget. Home to miles of a beautiful white-sand beach along the Atlantic Ocean, Jones Beach has welcomed more than 63 million visitors over the last decade and hosts the renowned Bethpage Air Show every Memorial Day weekend, regular concerts at the Nikon Theater, and many other recreational programs and services.

“Jones Beach visitors have a real romanticism with this park. With Governor Cuomo’s historic annual commitment to our State Park system, we are primed to fund this Revitalization Plan so that Jones Beach can be enjoyed by future generations,” said State Parks Commissioner Rose Harvey. “I would like to thank the Alliance for New York State Parks and all of our partners who offered their services and expertise to help us shape this vision and get it to a point where we can now bring this to the people so that they may now weigh in and offer their ideas.”

With financial support from the Open Space Institute’s Alliance for New York State Parks program to create a study to reflect the needs on Jones Beach, the Office of State Parks, Recreation and Historic Preservation (OPRHP) was able to create the Revitalization Plan. This plan will invest $65 million dollars over five years into the park, creating more than 620 jobs. Expanded concession services and public-private partnerships will provide more opportunity to promote, encourage and expand small business growth. The most recent study by the University of Massachusetts at Amherst found that New York State Parks support $1.9 billion in economic activity annually, including $410 million in spending and 3,990 private sector jobs on Long Island.

The proposed new and improved services, amenities, and overall accessibility are expected to boost attendance and make Jones Beach an all-day destination, attracting new visitors while remaining loyal to those who frequent the park regularly. Since its inception the NY Works initiative has invested and helped leverage a total of $265 million for 192 projects across 81 state parks. One year after the program went into effect, state park visitation hit a 14 year high.

Restore Historic Grandeur
The Revitalization Plan envisions returning the park to its historic and aesthetic grandeur that was so prominent under famed master builder and Jones Beach creator, Robert Moses. The park’s major buildings, including the East and West Bathhouses and Central Mall buildings will be rehabilitated. Cultivated gardens, native and natural vegetation, restoration of the Central Mall lawn and fountain are all proposed for reintroduction while a number of historic brick and stone buildings would be restored with many historic features resurrected.

Expand Food & Beverage and Recreation
New and improved recreational opportunities and a wider variety of food and beverage options will be introduced to better serve the park’s millions of visitors each year. New and improved recreation would include volleyball, soccer, cricket, miniature golf, yoga, as well as the proposed introduction of an adventure play area complete with water features, rock climbing, and a zipline. The re-design of selected areas will allow for additional vendors to offer more diverse, ethnic and local food selections. Visitors would be able to choose between restaurant with patio dining, a diner, take-out, marketplace options, and a beachfront café.

Streamline Park Entry
Park entryways would be rebuilt as attractive Welcome Plazas to streamline entrance to the park utilizing automation. In addition, signage throughout the park will promote better accessibility.

Increase Storm Resiliency
Governor Cuomo’s NYS 2100 Commission and the Reimagining New York for a New Reality Program have charted out a bold vision for improving the resilience and strength of the state’s infrastructure in the face of natural disasters. The Jones Beach Revitalization Plan implements this sustainability vision by rebuilding the beach’s infrastructure to better withstand major weather incidents as extreme weather becomes more likely as a result of climate change. A multi-pronged strategy has been developed that includes addressing the coast erosion hazard zone setbacks, elevating new structures subject to flooding, raising utilities of existing structures, and allowing the natural accretion of dunes in select areas of the beach where it will not obstruct patron views from the historic boardwalk. Storm resilient energy efficient materials and green technologies will be employed through the revitalization plan.

Visitors will experience some of the restoration efforts already underway by OPRHP at Jones Beach State Park this summer, including: the completed restoration of the historic West Bathhouse, which will be open to visitors before the Memorial Day weekend and includes exterior restoration as well as replacement of the pool deck and filtration system; a pilot food marketplace project at the site of the former boardwalk restaurant on the Central Mall that will feature more vendors and a wider variety of fresh food accompanied with shaded seating for leisurely enjoyment; and a seasonal restaurant concept at Field 6 and the East Bathhouse for open air and convenient food and drink.

New York State Senate Co-Leader Dean Skelos said, “Jones Beach State Park has long been an asset that has helped make Long Island such an attractive place to live and play. This important capital investment by Governor Cuomo and OPRHP will help bring new life to the park’s historic infrastructure and help it continue to be a draw for individuals and families for generations
to come.”

“I would like to thank Governor Cuomo for this visionary funding,” said Senator Phil Boyle. “It will help return Jones Beach to its former splendor, and the grandeur will then continue for many years to come.”

“Jones Beach is a treasure to the millions of Long Islanders who visit every year,” said Assemblyman Robert K. Sweeney, Chair of the Environmental Conservation Committee. “I applaud the forward-thinking plan to modernize park offerings, preserve its historic architecture, and adopt common-sense protections from the impacts of climate change.”

Assemblywoman Margaret Markey, Chair of the Assembly Committee on Tourism, Parks, Arts and Sports Development, said: “Jones Beach is a treasure for Long Island and the entire metropolitan region, but it suffered enormously from the ravages of recent storms. Now, it will come back, bigger and better thanks to this five-year revitalization plan by the Governor. As it progresses, visitors will have better access, more recreational choices, and a wider variety of food and concession opportunities. And, best of all, we can look forward to the revival of the original historic atmosphere that made this great park one of the region’s most popular destinations.”

Assemblyman Dave McDonough said, “Jones Beach, the crown jewel of recreation in my district, is the essence of what makes a Long Island summer great. As we begin the celebration of its 81st Anniversary, I’m happy to join Gov. Cuomo to announce this latest NY Works project. The revitalization of these historic structures and the improvements to the facilities will make the summers at Jones Beach the most exciting in many years. Most notably, the inclusion of new vendors, especially those specializing in New York- made foods and products, will have a tremendous economic impact and create many new jobs at the beach and in the surrounding communities. I look forward to joining the governor and my colleagues as we celebrate the past and many years of fun to come at Jones Beach,”

Assemblyman Joseph Saladino said, "We all should be very excited about the new and improved state facilities that we have loved for all of our lives. Jones Beach has always been the jewel of Long Island and this proposal will make it better and more attractive for all long islanders."

Nassau County Executive Ed Mangano stated, “I commend Governor Cuomo for his plans to invest significant dollars in restoring the beautify of Jones Beach and for ensuring repairs are made so that this gem continues to serve our residents and visitors alike for decades to come.”

“This project is an enormous victory for all Long Islanders,” said Suffolk County Executive Steve Bellone. “Thank you to Governor Cuomo for spearheading this incredibly important initiative that will return Jones Beach to its former state while bringing exciting new upgrades to this iconic recreational hub. This project and others like it that Governor Cuomo has put forth not only grow our economy and quality of life but provide much needed storm resiliency for Long Island.”

Kim Elliman, President and Chief Executive Officer of the Open Space Institute said, “The enormous transformational possibility of the Jones Beach Revitalization project is a testament to the leadership of Governor Cuomo and Commissioner Harvey. Their combined commitment to protecting and enhancing our state parks through investment ad key collaborative efforts are at forefront of this important public-private endeavor. OSI, through its Alliance for New York State Parks Program, is proud to play a role in restoring Jones Beach; a treasured park that, through this plan, will continue to combine natural and architectural beauty with resilient planning and creative, thoughtful and inviting public amenities.”

Robin Dropkin, Executive Director of Parks and Trails New York said, “The Jones Beach Revitalization Plan will transform one of the most iconic and popular parks in the NYS Park System. The prospect of the restoration of Jones Beach is very exciting and is further evidence of the leadership and commitment of Governor Cuomo and Parks Commissioner Harvey to realize a wide-ranging park renaissance in New York State.”

In the coming days, public meetings will be scheduled to provide multiple opportunities for the community to review, explore and comment on the Jones Beach Revitalization Plan. To view information on the initiative, click here.

For more information on the many features of Jones Beach State Park, click here.

The New York State Office of Parks, Recreation and Historic Preservation oversees 179 state parks and 35 historic sites, which are visited by more than 60 million people annually. For more information on any of these recreation areas, call 518-474-0456