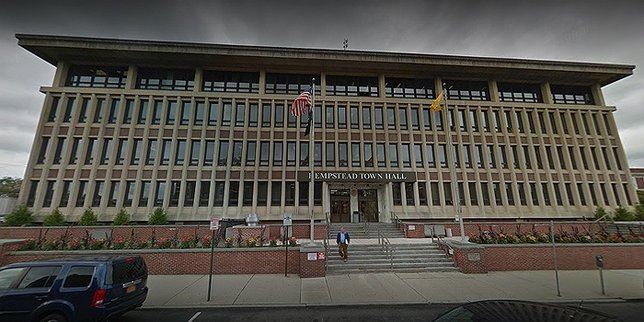 Hempstead Town Hall is one of four Long Island landmarks that have been recommended by Governor Andrew Cuomo to State and National Registers of Historic Places.

Albany, NY - March 16, 2018 - Governor Andrew M. Cuomo today announced that the New York State Board for Historic Preservation has recommended adding 20 properties, resources and districts to the State and National Registers of Historic Places. The nominations reflect the striking diversity of New York's history and include a covert FBI radio transmission station, a landmark in aviation history now used as a community college, and a facility used in the transmission of electricity from Niagara Falls to Buffalo in the early 1900s.
"This administration is committed to helping communities preserve the storied history of this great state," Governor Cuomo said. "By designating these landmarks, New York is encouraging economic and community development, while supporting local businesses and preserving the rich character of the Empire State."
State and National Registers listing can assist property owners in revitalizing buildings, making them eligible for various public preservation programs and services, such as matching state grants and state and federal historic rehabilitation tax credits. Since the Governor signed legislation to bolster the state's use of rehabilitation tax credits in 2013, the state and federal program has spurred more than $3 billion of investment in historic commercial properties.
"Listing on the State and National Historic Registers is an important step in helping to preserve and improve these assets," said Rose Harvey, Commissioner of the Office of Parks, Recreation and Historic Preservation. "Protecting these distinctive places can help bolster economic growth and quality of life across New York State."
The State and National Registers are the official lists of buildings, structures, districts, landscapes, objects and sites significant in the history, architecture, archeology and culture of New York State and the nation. There are more than 120,000 historic buildings, structures and sites throughout the state listed on the National Register of Historic Places, individually or as components of historic districts. Property owners, municipalities and organizations from communities throughout the state sponsored the nominations.
Capital Region
Finger Lakes
Long Island
Mid-Hudson Valley
Mohawk Valley
New York City
North Country
Southern Tier
Western New York
Once recommendations are approved by the state historic preservation officer, the properties are listed on the New York State Register of Historic Places and then nominated to the National Register of Historic Places, where they are reviewed and, once approved, entered on the National Register. More information and photos of the nominations are available on the Office of Parks, Recreation and Historic Preservation website.