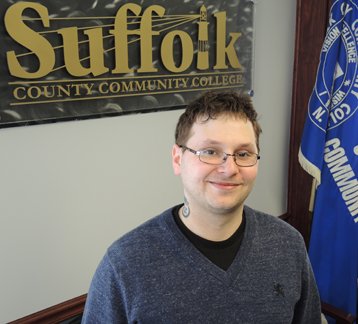 Selden, NY - March 16th, 2015 - Ian Kotler just might be following in the footsteps of Suffolk County Community College graduate and now retired Astronaut Robert "Hoot” Gibson (class of ’66).
Kotler, 28, of Lake Grove, an Earth & Space Sciences major with an Astronomy emphasis at the college’s Ammerman Campus in Selden has been invited by NASA to visit the Johnson Space Center in Houston this May after completing a series of exams and delivering a proposal for a Mars Rover.
Kotler applied for and was accepted for the online component of the NASA Community College Aerospace Scholars (NCAS) project. The budding astrophysicist took a series of exams, in which Ian achieved a perfect score, and delivered to NASA a proposal that included a design for a Mars Rover. Kotler's design included operational specifications, mission objectives, project time lines and public outreach initiatives. Kotler called his rover project  Interplanetary Dual Excavating Pair of Traversable Hydrocarbon Seismometers (iDepths) that he designed to run on a radioisotope thermoelectric generator powered by plutonium 238.
“Ian entered Suffolk County Community College not really knowing what he wanted to do in his life, but whilst here discovered his passion for science, and astronomy in particular. Through hard work and with the guidance of the faculty, he is now beginning what I am sure will be an amazing, lifelong journey in astronomy. It just goes to show what students can achieve at Suffolk if they put their mind to it,” said Dr. Mike Inglis, Professor of Astronomy & Astrophysics.
Kotler’s project was a huge success and NASA commended him for “…the dedication you put forth in the NCAS online session as well as the quality of your assignment submissions.”
Kotler has now been invited for an all-expenses paid week-long visit to the Johnson Space Center where he will work alongside NASA scientists and engineers.
Kotler, a 2005 graduate of Smithtown High School, says he expects to graduate from Suffolk County Community College in May of 2016, and plans to study Astrophysics at the University of Hawaii at Hilo after earning a bachelor’s degree from Stony Brook University.