Garbarino: "Medicaid costs, padded by all the excessive mandated services by the state, have put great burdens on counties like Nassau and Long Island taxpayers." 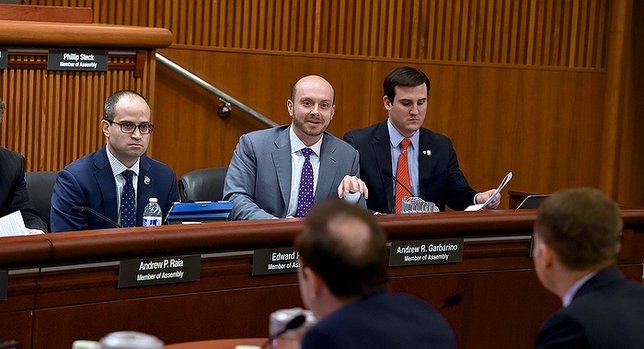 Long Island, NY - March 15, 2018 - Assemblyman Andrew Garbarino (R,C,I,Ref-Sayville) and his Republican colleagues introduced legislation that would restructure the state’s Medicaid program, which is one of the costliest in the country. The legislation would require the state to take over the local share of Medicaid costs over a 10-year period for counties outside of New York City and over a 20-year period for 50 percent of New York City’s local share of Medicaid. The plan would create significant savings for local taxpayers and would force the state to take measures to create savings within the program.
“Medicaid costs, padded by all the excessive mandated services by the state, have put great burdens on counties like Nassau and Long Island taxpayers. We simply cannot afford Medicaid unless serious changes are made,” said Garbarino. “Our Medicaid restructuring plan would force the state to be responsible for its growth and to ensure it is running efficiently for those who do need its services and those who are paying for it. I think this plan is both fiscally smart and socially responsible.”
The current Medicaid program requires that localities cover a portion of its costs, namely those which are not required by federal law. New York is one of 18 states to require local payment of Medicaid. In total, the Medicaid program cost $72.1 billion in the 2017-18 fiscal year, and $8.2 billion is paid for by New York state localities. Medicaid mandates alone consume nearly half of the local property taxes levied in counties outside of New York City.
New York’s Medicaid plan is much like a “Cadillac Plan” with numerous state-mandated services which are not required by law. This has led to ballooned costs within the program. New York is only outspent by one other state, California, which has twice the number of enrollees in its program and only spends $10 billion more. Additionally, New York spends more than Texas and Florida combined.
Any savings realized by the transfer of payment responsibility from localities to the state must be passed on directly to property taxpayers. Additionally, the program would create an incentive for the state to look for efficiencies and reduce waste in Medicaid to keep the program more affordable. Costs of the transfer would be covered through several funding sources without creating new taxes.