Nassau County Exec Mangano today reminded residents that any road issues such as potholes, which are common in the colder months, should be reported. 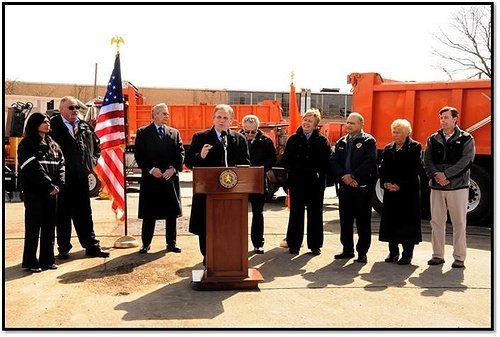 Nassau County, NY - March 2nd, 2016 - Nassau County Executive Edward P. Mangano today reminded residents that any road issues such as potholes, which are common in the colder months, should be reported to the Nassau County Department of Highways at 516-571-6900 or through the Nassau Now mobile application.

Under a plan announced last year, Nassau County reports pothole complaints in “real-time” to cities, towns and villages so that their highway crews can also be dispatched to address road conditions with urgency.

“Mother nature takes its toll on all roadways during the winter months,” said County Executive Mangano. “My administration has an aggressive program to fill potholes throughout Nassau in order to maintain the highest level of safety for vehicles and pedestrians on County roads.”

Pothole repairs on Nassau County roadways are made within 24 hours of being reported by residents. In addition, County employees patrol County roadways to locate and address any issues caused by the winter weather.

Potholes form as asphalt road surfaces crack under the heat of the day. These cracks allow snow and rain water to seep into the underlying dirt and gravel. This water freezes and expands, and as a result dirt and gravel is pushed out leaving a hole when the water eventually melts.

While winter has resulted in thousands of potholes throughout the region, additional potholes are expected to open as the weather warms.

To report a pothole issue, please call 516-571-6900 or download and use the Nassau Now mobile application on your smartphone or mobile device.

The app will enable a photograph to be taken of the area and sent to the Highway Department with the GPS location.