Legislator McCaffrey Honors Eagle Scout for Service to the Community 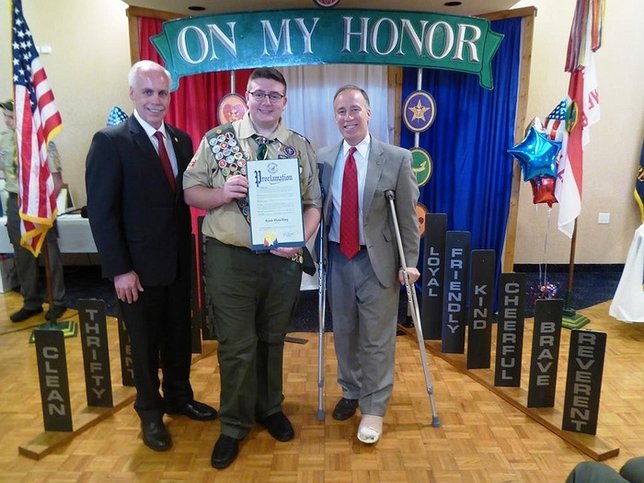 In order to attain the rank of Eagle Scout, every candidate must satisfy a wide variety of requirements before each milestone along the path is reached.  Perhaps the most significant – and challenging – requirement that a candidate has to tackle is the service project. This project is intended to be a lasting contribution to the community, and is planned and executed by means of the candidate applying the skills he acquired through his many years of Scouting.

For his service project, Sean chose to restore a largely forgotten part of West Babylon History – the Larsen Lane Cemetery. This particular cemetery had fallen into a sad state of disrepair over the years, despite the fact that it is the resting place for veterans from as far back as the Civil War and up to Vietnam.  As a Boy Scout, steeped in reverence for his country, Sean found this situation to be simply unacceptable, thus his project began to materialize.

After locating and coordinating various members of the community, Sean was able to secure both the necessary personnel and materials to begin the restoration project.  After all was said and done, the landscaping was rejuvenated, in addition to having four cement benches thoughtfully placed, a flagpole installed with a beautiful border.

“Sean is a remarkable young man with a deep understanding of the sacrifices of those in this resting place,” said McCaffrey.

“Through Sean’s hard work and perseverance, the contributions of these veterans will be remembered, and visitors can really contemplate our history and what it means to be an American.”

About BSA Troop 175
For those interested in learning more about the Boy Scouts in Suffolk County, they are strongly encouraged to visit: http://www.sccbsa.org/.  To learn more about Troop 175 specifically, please visit their website.