LongIsland.com's Alexa.com Ranking continues to climb as more locals turn to the site daily for the best local Things to Do, Events, Dining, Local Businesses and latest News. 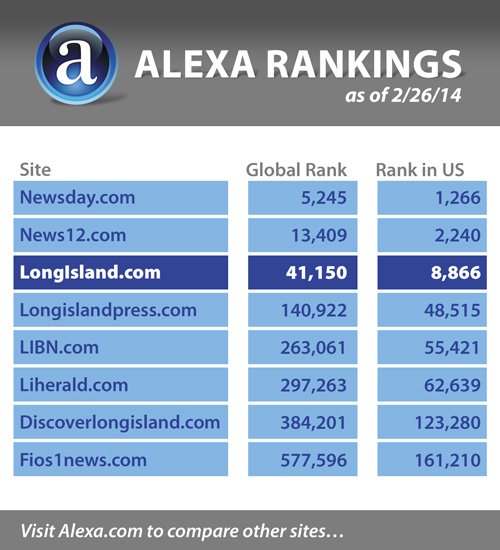 Kings Park, NY - February 28th, 2014 - As LongIsland.com continues to expand its localized information, news, and resources, its Alexa.com ranking has continued to climb. As of February 26th, the site's US Ranking is 8,866, a significant jump from the previous year - in July of 2013, LongIsland.com US Ranking was 12,978. Alexa Rankings are determined by comparing how well a website is performing in comparison to all other websites on the internet over the period of the past three months. For almost two decades, Alexa has been the premier online tool for tracking the success and popularity of websites.

Since relaunching LongIsland.com in March of 2012, the Long Island Media team has continued to expand the site's content and resources, including its ever-popular Things to Do Section, thorough Resources and helpful Guides, and its extensive Business Directory, as well as countless other sections throughout the site. With the number of daily visitors continuing to grow, its no surprise that LongIsland.com's Alexa Ranking has jumped so significantly from 2013, moving up thousands of places in a matter of just a few months. Cait Russell, Creative Director, is quoted as saying "LongIsland.com's continual growth popularity and rise in the Alexa Rankings has been incredibly exciting for us - it's great to see how receptive locals have been of the content LongIsland.com provides."

As compared to other targeted Long Island websites, LongIsland.com Ranks #3 according to Alexa.com – trailing only behind Newsday and News 12, which also cover additional regions of New York (See: Accompanying Graphic for Reference).

In 1996, LongIsland.com was founded with the purpose of providing locals with the quality local  information and resources – something that it has continues to do ever since its original launch. As the site continues to grow in popularity, so it does in information, with new resources, guides, listings, and news being added and updated daily – providing Long Island with comprehensive and accurate detail, no matter what is being searched for. LongIsland.com provides information for locals and tourists on the best upcoming events, dining, shopping, and nightlife for LI, as well as the latest local news, insights, and press releases. The site's dedication to high quality content and accurate information has made it a favorite destination for Long Islanders online, as evidenced by its status as the 3rd most popular geo-targeted site for Long Island.

With its Alexa.com ranking and site traffic continuing to climb each year, LongIsland.com is on track to have a spectacular 2014, as more locals make the site their daily go-to resource for all things Long Island.