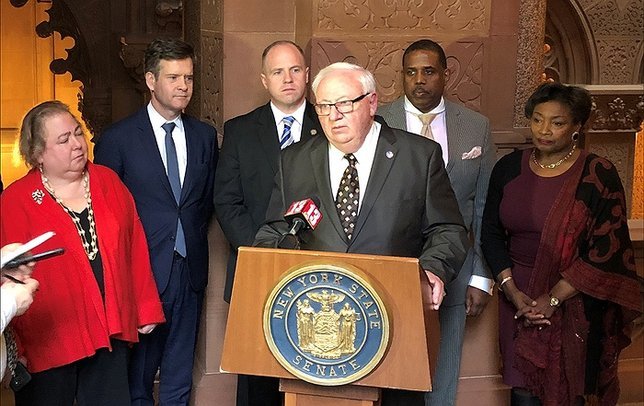 Long Island, NY - February 27, 2018 - Senator John E. Brooks today demanded that the Child Victims Act be passed into law this Legislative Session, ideally within the 2018-2019 State Budget. Senator Brooks also announced his sponsorship of a Long Island Public Forum on Childhood Sexual Abuse, #KidsToo; How NY Fails Child Victims to be held on March 8.
According to the National Sexual Violence Resource Center, one in four girls and one in six boys will be sexually abused by the time they turn 18, and nearly three quarters of all reported sexual assault victims are children. Additionally, reports have revealed that 73% of child victims do not tell anyone for at least a year and 45% of child abuse victims do not tell anyone for at least five years. By the time that victims recognize that they have been abused and are able to tell someone about it, in a large number of cases the statute of limitations has already expired.
To address these concerns, and to help the survivors of these crimes seek justice, Senator Brooks is fighting to pass the Child Victims Act. When passed into law, the Child Victims Act will raise the criminal statute of limitations for several child sexual abuse crimes to age 28, and raise the civil statute of limitations for causes of action brought by someone seeking redress for physical, psychological or other injury caused by child sexual abuse to age 50.
Senator Brooks said, "There is no greater responsibility that we have, than to protect our children. Predators continue to kill the souls of defenseless young girls and boys while some in Albany refuse to act. It is unfathomable that anyone can still be obstructing the immediate passage of the Child Victims Act. I ask anyone to look into the eyes and listen to the grief and trauma experienced by victim-survivors of childhood sexual abuse, and then continue to deny them justice."
Currently, the Child Victims Act is included in Governor Cuomo’s budget proposals, and Senate Democrats urged the Senate Republican Majority to not negotiate it out of the final, enacted State Budget. The Child Victims Act has the support of Governor Cuomo, the Senate Democratic Conference, and the Assembly Democratic Majority, but has been blocked from taking effect by the Senate Republican Majority. This legislation will also create a one year window, starting six months from the effective date of the bill, for past victims of child sexual abuse to initiate lawsuits against their abusers, and create parity in how regulations impact public and private institutions under these circumstances.
In order to raise awareness of both the magnitude of this heartbreaking issue and measures to address it, Senator Brooks is sponsoring a public forum on childhood sexual assault Thursday night, March 8 at Farmingdale State College’s Little Theater in Roosevelt Hall, from 6:30 p.m. to 8:30 P.M.
Titled, “#KidsToo; How NY Fails Child Victims”, a panel of experts in trauma, law, law enforcement; victim service providers and survivors will discuss the need to reform New York's antiquated statutes of limitations for child sex abuse crimes. Hosted in concert with Assemblymembers Kimberly Jean-Pierre and Christine Pellegrino, there is no charge for the event and seating will be available on a first-come, first-served basis. Those interested in attending are encouraged to RSVP at this link.