The Major Case Bureau is investigating a Bank Robbery that occurred on Thursday, February 25, 2016 at 4:58 P.M. in West Hempstead. 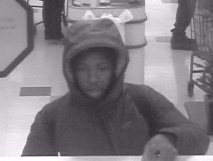 According to Robbery Squad detectives, a male black subject entered the Peoples United Bank inside the Stop & Shop Supermarket located at 50 Cherry Valley Avenue, approached the teller and produced a demand note.

The 32 year old female victim complied and the subject fled on foot southbound towards Hempstead Turnpike with an undisclosed amount of US currency.

There were three employees and no customers inside the bank at the time of the robbery. There were no reported injuries.