A man pretended to have a gun and tried to rob a convenience store in Port Jefferson Station. 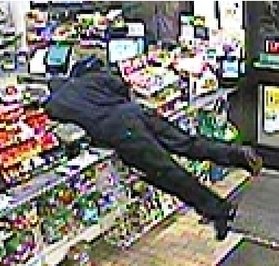 Port Jefferson Station, NY - February 26, 2014 - Suffolk County Crime Stoppers and Suffolk County Police Sixth Squad detectives are seeking the public’s help to identify and locate a man who attempted to rob a Port Jefferson Station convenience store.
A man simulated having a gun and ordered her to open the cash register at 7-Eleven, located at 500 Old Town Road, on February 18, at approximately 3:40 a.m. The clerk fled the store and the suspect reached over the counter and tried to open the cash register. He fled the store before any proceeds were taken.
The suspect was described as white, wearing a bulky, hooded navy blue jacket, black pants and dark shoes with white laces. He was driving a dark-colored van.
Suffolk County Crime Stoppers offers a cash reward of up to $5,000 for information that leads to an arrest. Anyone with information about this crime is asked to call anonymously to Crime Stoppers at 1-800-220-TIPS. All calls will be kept confidential.