Mordechai Miller spoke to seventh grade students at Temple Beth David this past January. He called himself “a hidden child” and his story is one of incredible luck and determination to survive as a Jew ... 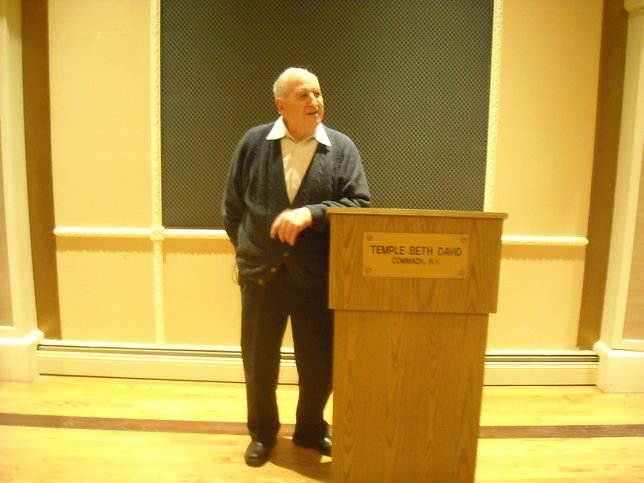 Commack, New York – February 24, 2013 - Mordechai Miller spoke to seventh grade students at Temple Beth David this past January.  He called himself “a hidden child” and his story is one of incredible luck and determination to survive as a Jew in Poland during World War II.

In 1939, eight-year-old Mordechai was living with his parents and his brother in occupied Poland, only 7 ½ miles outside of Warsaw.  That same year, there was a proclamation that Jewish children could not attend school and all Jews had to be moved into a Ghetto.

Jewish families had to endure “contribution days” when they were forced to pay the authorities in gold and other possessions. Food was gotten with a barter system under threat of death for leaving the Ghetto.  Hunger was their constant companion.  They supplemented their meager portions with whatever they could grow in small gardens.  “Thank goodness for the onions,” said Mordechai to the children. “If you brown them in a pan, at least there was something to taste, some flavor”.

Mordecai told a story of how the soldiers would taunt the Jewish women as they walked to get food for their families.  One day his mother was sneaking out of the Ghetto to get some food and was stopped by soldiers who beat her and told her to run.  “Hearing shots, she couldn’t believe that she was still running and still alive”, he said.  In a second incident when she bartered clothing for roughly 50 pounds of potatoes, some Polish thugs chased her.  She fell and injured her knee but she continued to run with the potatoes until she got back to the ghetto. Her knee swelled and was badly black and blue. The doctor that was in the Ghetto wasn’t a surgeon and didn’t know what to do for her. Mordechai’s father asked the doctor if he knew a surgeon outside of the Ghetto and he said there was a Russian refugee who was surgeon.  He risked his life to get in touch with the doctor who at first didn’t want to risk his own life to come to the Ghetto. But he changed his mind and told Mordechai’s father that when he took an oath to become a doctor, he could not pay attention to his personal comfort. This profound act of courage and rare act of kindness saved Mordechai and his family because two weeks after his mother’s surgery, in October 1942, the Ghetto was liquidated and she would not have been able to go into hiding without that surgery.  Thus began their 27 ½ months of hiding.

The Miller family hid in various places and always for a price.  No one would take a chance hiding Jews without compensation.  While in hiding, they managed to observe the holy day of Yom Kippur.  Since they had no calendar, they picked a day and fasted by skipping their daily meal of a slice of bread.

In 1944, the Germans learned of Jews being hidden in the town so the Miller family moved on yet again.  For a while, they hid in the forest.  While in the forest, they met a German soldier who had been hunting.  Thinking that the Millers were local peasants he offered them a job to help in the kitchen, as there were no more locals left. The Millers were offered food and any house in the village in exchange for working in the kitchen.  Mordechai said they were afraid to refuse the offer because it could arouse suspicion.  Once working for them, they learned that the soldiers were the SS Viking Division, 5th Company, Panzer Grenadiers.  They were treated well and stayed with them for about three months.  When the soldiers were transferred to fight in Hungary, the Millers stayed behind with a letter of recommendation given to them by the German soldiers.  Another unit arrived and the Millers worked for them as well.  Without the work, there would be no food.

On the evening of January 16, 1945, a local woman told a German cook that she suspected the Millers were Jewish.  The German said he would take care of it the next day with his pistol.  But the next day, January 17, 1945, 14-year-old Mordechai and his family were finally liberated by the Russians.

Mr. Miller said that these stories are only a small part of the fright they lived with, every hour of the day and night.  “As a child I knew how spiders spun their webs by observing them as there was not much else to do while we were in hiding. My mother lost all her teeth, we suffered from muscle loss, malnutrition and lice and couldn’t speak aloud without our throats hurting because all we could do is whisper.  I’d need 500 pages to tell the entire story.”

The children asked numerous questions including whether Mordechai was able to keep anything during those years that was special to him.  Children today have so many possessions that it seemed almost unbelievable to them that the Miller family would have no possessions at all.  Mordechai thought and recalled a pocketknife that he had been able to keep throughout their struggle.

In 1948, the Miller family moved to Israel where Mordechai served in the Israeli Army for six years.  It wasn’t until 1956 that he came to the United States.  He lived in Brooklyn where he met his wife.  He later moved to Long Island and raised his family.  He has 4 children and 6 grandchildren.