Governor Cuomo announced that more than 370 students from SUNY and CUNY schools, competing in more than 70 teams, registered to take part in the Making College Possible Coding Challenge. 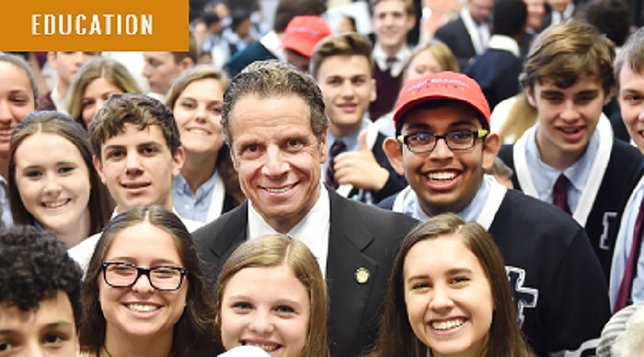 $2,000 cash prize for finalists furnished by SUNY and CUNY systems.

Albany, NY - February 21, 2017 - Governor Andrew M. Cuomo today announced that more than 370 students from SUNY and CUNY schools, competing in more than 70 teams, registered to take part in the Making College Possible Coding Challenge, the first-ever statewide coding competition for SUNY and CUNY students. The challenge invites students to create a digital prototype of a mobile app or website to share information about the Excelsior Scholarship and what “making college possible” means to them.  The students, who represent a wide variety of two- and four-year SUNY and CUNY schools across the state, received an official prompt to begin creating their digital prototype on February 14. The first draft of their prototype is due February 27.

"The impressive number of submissions displays the breadth of talent and spirit of innovation embodied by our SUNY and CUNY students," Governor Cuomo said. "By providing tuition-free college to SUNY and CUNY schools, the Excelsior Scholarship will help thousands of students pursue their dreams, and this challenge provides a unique opportunity to let students share what this pioneering proposal means to them, as well as show the world their creativity and ingenuity."

The preliminary judging will take place in late February, and the top five entrants will move on to the final judging and pitch session, to take place in early March in New York City. The finalists will work with mentors from New York’s technology community and pitch their final products to a judging panel that will select one winner. The winning submission will be used to promote the Excelsior Scholarship, and the finalists will receive $2,000 per team furnished by the SUNY and CUNY systems.

SUNY Chancellor Nancy L. Zimpher said, “SUNY students from throughout the state have seized on the opportunity of Governor Cuomo’s coding competition, and with good reason. The competition provides an opportunity for students to showcase their talent and creativity while also producing a new platform where the value of college affordability can be shared with their peers, in their own voice. I look forward to seeing what our students come up with.”

CUNY Chancellor James B. Milliken said, "CUNY has terrifically talented students who, like most college students, are concerned about the cost of education.  This competition combines their passions for technology and access to education.  Thanks to Governor Cuomo for launching the coding competition but especially for the ground-breaking Excelsior Scholarship Program."

More than 70 teams of students from the following SUNY and CUNY schools across the state registered for the competition:

The Excelsior scholarship aims to change that, saving students time and money by reducing their overall debt burden. The plan also recognizes there may be circumstances outside students' control, which is why the proposal includes a “stepping out” provision so that students will be able to pause and restart the program if life gets in the way.