Properties near LIRR station will be made into mixed-use, transit oriented developments. 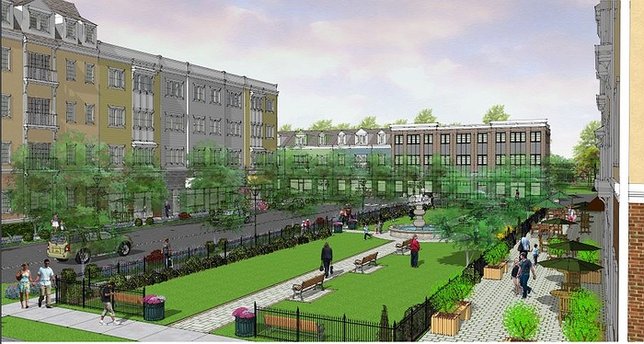 For years, the village of Westbury has been planning a revitalized downtown that includes the rezoning of 53 acres of property within the area encompassed by Post Avenue, Maple Avenue, School Street and Union Avenue from industrial use to mixed-use residential to facilitate transit-oriented development projects around the Long Island Railroad station.

This past December, the village passed sweeping changes to its zoning code to help bring this vision closer to reality. Dubbed the Maple Union Transit-Oriented Development District the area is now zoned for mixed-use residential with ground-floor retail and commercial in addition to other projects that the village hopes will foster a more cohesive and vibrant downtown.

A July 2019 presentation of the zoning changes proposed a density of 35 units per acre, 50,000 square feet of new space, up to 1,500 new parking spaces plus a new LIRR parking garage, and an estimated investment of $351 million of private money. According to reports, some of the zoning subdistricts will allow for buildings as tall as five stories, although these taller buildings would have to come in exchange for some public benefit.

These projects will add well over a thousand new residential units to the area.

A report produced by the village explained that the new vision will “facilitate a mix of retail, commercial and residential uses that continue to bolster the economic vibrancy of the downtown, and to enhance the quality of life for residents, workers and visitors.”

Its stated goals are to foster transit-oriented development that allows for increased density, mixed-use development in the Maple Union area; improve pedestrian and visual connections between the LIRR Station and downtown; encourage the development of diverse housing options; and improve walkability.

Mayor Peter Cavallaro called the changes “historic”  in a statement on a video released by the village.

In the meantime, the village has already tackled a number of projects as outlined in a $10 million downtown revitalization grant from New York State’s Regional Economic Development Councils it received in 2016. The awards included: