Sheriff Fludd is the first woman and first African-American to be Nassau County Sheriff. 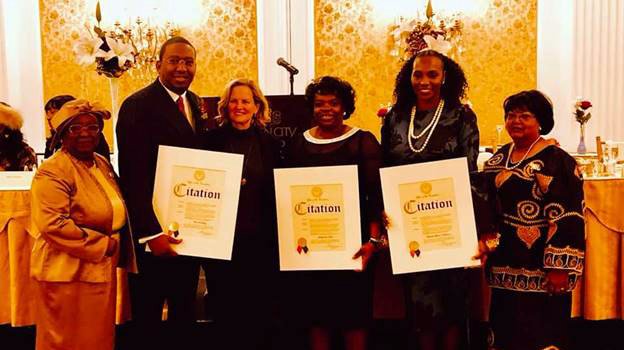 Mineola, NY - February 7, 2019 - Nassau County Executive Laura Curran joined Nassau County Sheriff Vera Fludd this weekend at the Long Island Cross County Section of the National Council of Negro Women’s Annual Black History Luncheon, where Sheriff Fludd was officially honored by the organization. Sheriff Fludd is the first woman and first African-American to be Nassau County Sheriff.
“I’m delighted to see Sheriff Fludd receive deserved recognition for her continued dedication to the law and to serving and protecting our residents,” said County Executive Curran. “Sheriff Fludd is tough but fair, and Nassau County is lucky to have her.”
“It is a privilege to serve and protect the residents of Nassau County,” said Sheriff Fludd. “I am deeply humbled by this honor, and I hope it serves as a reminder for people that all things are possible.”
In their official honoring of Sheriff Fludd, the National Council of Negro Women addressed her as follows:
“We believe that you truly edify our rich heritage through your commitment to serve the greater Nassau County community, both professionally and socially. As a Civil Servant and Community Advocate you truly embody the attributes of a model woman. We know there are many contributions made by you to uplift and empower all members of your community. At this juncture we are saluting you for the numerous way you go about this task.”
Vera Fludd, of Freeport, became a correction officer at the Nassau County Correctional Center in 1987 after attending Nassau Community College. She rose in the ranks until County Executive Curran appointed Fludd as the County’s acting sheriff on January 1, 2018. She was then selected Sheriff officially on March 9, 2018.
County Executive Curran also recognized two other honorees this weekend: Carl DeHaney, Jr., a Coordinator of Behavioral Health at the Nassau County Department of Health and Human Services, and Yolanda Garner-Hutcherson, a Case Worker at the Nassau County Department of Social Services.