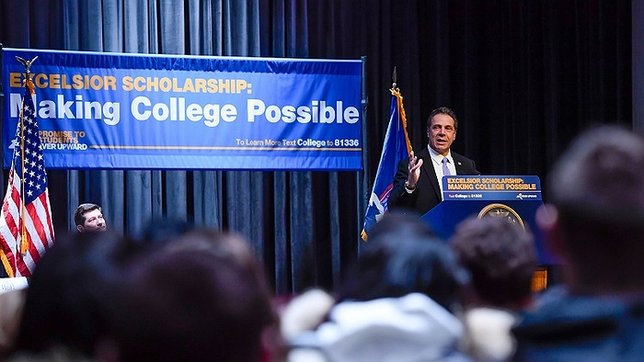 Innovative plan would make college tuition-free for families making up to $125,000 per year, saving students both time and money by alleviating crushing burden of student loans and incentivizing on-time graduation.

Albany, NY - February 7, 2017 - Governor Andrew M. Cuomo, joined by more than 600 students and supporters, today kicked off the Excelsior Scholarship Campaign at Buffalo State College in Western New York. In the coming weeks and months, the Governor will tour SUNY and CUNY campuses statewide to ensure hundreds of thousands of students across the state realize their dreams of higher education and work to make college tuition free for New York’s middle-class families.

Under the Governor’s bold proposal, approximately 80 percent or more than 940,000 New York families would qualify to attend SUNY or CUNY tuition-free. The Governor also released a regional breakdown of eligible families in every corner of the Empire State, available here.

As part of the new campaign, the Governor is also deploying Lieutenant Governor Kathy Hochul and cabinet members to meet with students and faculty at SUNY and CUNY campuses in support of the first-ever free tuition plan at both two- and four-year colleges.

“In New York, education was always the great equalizer, but today far too many young people have been deprived of the advanced degree they need to get ahead, compete in the global economy, and secure the jobs of tomorrow,” Governor Cuomo said. “The Empire State is sending a message loud and clear that under the Excelsior Scholarship program students’ dreams of higher education will be realized no matter how much money is in their pocket or the neighborhood they come from. We are at a time of transformation – and New York will be the first in the nation to enact free tuition for middle-class families and move our economy forward. So to the Senate and Assembly I say, pass this plan and the rest of the country will follow.” 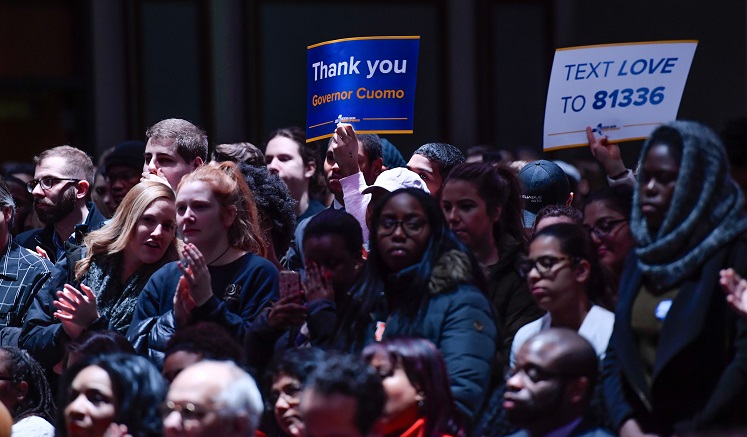 A regional breakdown of families who would be eligible for the program is available below.

Know the Facts – The Excelsior Scholarship

The Excelsior Scholarship program requires participating students to be enrolled at a SUNY or CUNY two- or four-year college full-time. The initiative will cover middle class families and individuals making up to $125,000 through a supplemental aid program. Currently 80 percent of NY households statewide make $125,000 or less with an estimated 940,000 households having college-aged children that would be eligible for the program.

The Excelsior scholarship aims to change that, saving students time and money by reducing their overall debt burden. The plan also recognizes there may be circumstances outside students control, which is why the proposal includes a “stepping out” provision so that students will be able to pause and restart the program if life gets in the way.

By 2024, 3.5 million jobs in New York State will require an associate’s degree or higher – roughly 420,000 more jobs than in 2014. But for too many families, the cost of college is currently out of reach. The Excelsior Scholarship will equip students with the skills they need to succeed by making an advanced degree tuition free, and ensure they are able to secure the high-tech, high-paying jobs of tomorrow. More information is available here.