Legislator William R. Spencer, M.D., gathered with medical and governmental officials yesterday at Huntington Hospital to urge residents to become informed about the risks of measles and what preventative measures they can take to protect ... 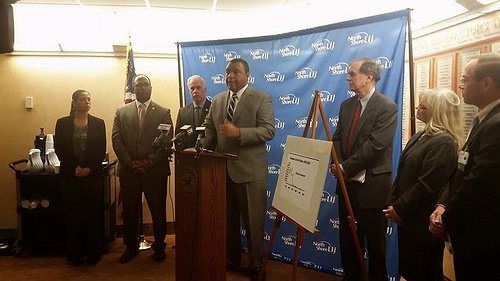 Huntington, NY - February 7, 2015 - Legislator William R. Spencer, M.D., gathered with medical and governmental officials yesterday at Huntington Hospital to urge residents to become informed about the risks of measles and what preventative measures they can take to protect the most vulnerable.

With the number of confirmed cases of the measles in January of 2015 surpassing the total number of diagnosed cases of measles during an entire typical year, public officials made it a point to emphasize the importance of vaccinations. The outbreak of measles has risen to 102 reported cases, and has spread to 14 states from coast to coast.  While the majority of cases are centralized in California, where the outbreak of the disease was initiated, measles has been reported in New York, and the CDC cautions that numbers could continue to rise.

“Before the measles vaccination program, which began in 1963, three to four million people in the U.S. got measles each year and 400 to 500 died. Widespread use of measles vaccine in the U.S. has led to a greater than 99 percent reduction in measles cases compared with the pre-vaccine era,” stated pediatric specialist, Legislator Spencer.

Measles is a highly contagious and serious acute respiratory disease which is found in the mucus of infected persons.  It can be easily spread by coughing, sneezing, close personal contact and direct contact with nasal and throat secretions.  On surfaces, the virus remains contagious for up to 2 hours, and can be spread to others for up to 8 days.  Once one of the most common childhood diseases, measles was responsible for 2.6 million deaths worldwide in 1980 alone, and due to widespread vaccination efforts, measles is now highly preventable.

“The single most effective way to prevent measles is to be vaccinated.  The measles, mumps and rubella (MMR) vaccination is safe and close to 99% effective.  It is fundamentally accepted as the key reason why measles was deemed eliminated from the United States in 2000.  We can’t afford to move backwards; it is crucial that all eligible residents be vaccinated,” stated Legislator Spencer.

Signs and symptoms of the disease appear within 10 to 14 days of exposure and include high fever, dry cough, runny nose, sore throat, inflamed eyes, tiny white spots on the inside the mouth (Koplik's spots) , and a skin rash made up of large red flat blotches beginning on the face and hairline and spreading downward.  Infants and children under 5 years of age, pregnant women, and immunocompromised individuals are at the highest risk of complications associated with measles.

“When measles gets into communities of unvaccinated people, outbreaks are more likely to occur,” said County Executive Bellone. “We are advising everyone in Suffolk County to do their part in keeping their families and community safe by making sure they and their children have received all recommended immunizations.”

Suffolk County Legislature Presiding Officer DuWayne Gregory stated, “The health and well-being of our residents is our primary concern. I want to thank Commissioner Tomarken and Legislator Spencer for raising awareness about the measles outbreak.  Vaccination is essential to prevention. Here in Suffolk County we want to ensure that there are comprehensive resources available to the community to combat this disease.”

“I may be showing my age here, but I received my immunization the old-fashion way; I had the measles as a kid,” stated Legislator Kevin J. McCaffrey who was a child prior to the measles vaccine being licensed and when the disease was widespread. “Many of the kids in my neighborhood suffered from it. It’s important that we don’t go back to those times and keep Suffolk County protected from the dangers of the measles. I also want to make the point that even if people have had the measles years ago they may still need a booster shot.”

“One of our concerns is that one in twelve children is not receiving his or her first dose of measles, mumps, rubella vaccine (MMR) on time, which causes vulnerability,” said Dr. Tomarken. “I urge all doctors to ensure all patients are up to date on MMR vaccine. It is important to consider measles in patients presenting with a febrile rash illness and other symptoms clinically compatible with measles; ask patients about recent travel; isolate patients with suspected measles and report the case to the Department of Health Services. Finally, be sure to obtain specimens for testing.”

For vital information about the disease and vaccinations, please visit the CDC website.