Put the dominant luge nation on one of their home tracks, combine it with an Oberhof course where few teams have extensive experience, and the outcome can sometimes be predictable. 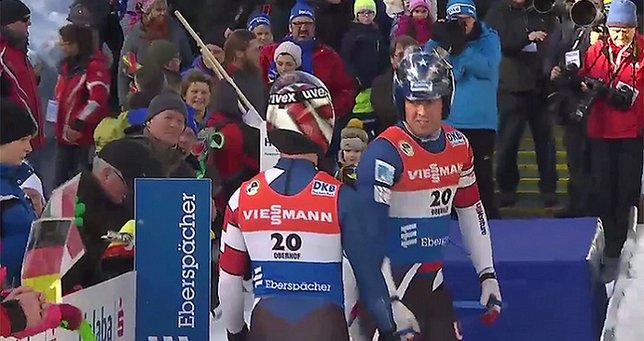 Oberhof, Germany - February 4, 2017 - Put the dominant luge nation on one of their home tracks, combine it with an Oberhof course where few teams have extensive experience, and the outcome can sometimes be predictable.

Their singles teammates then nearly followed suit, taking gold and bronze with a revived Felix Loch collecting the victory. Only Russian wonderkind Roman Repilov interrupted the party, using a track record second run on his way to the silver medal.

The only thing that went wrong for the Germans occurred when Ralf Palik, celebrating a fast second heat, punched the air in celebration and dislocated his right shoulder.

Other than doubles, nothing has been a given for Germany this season, but the winter resort of Oberhof has historically been their get-well course.

USA Luge, after a record-setting World Championships last week in Igls, Austria where they grabbed one gold and two silver medals, were led by the doubles sled of Matt Mortensen and Jayson Terdiman. They mustered an eighth- place finish on yet another shorter track as was the case a week ago.

World Cup rookie Jonny Gustafson competed in the World Junior Championships in Sigulda, Latvia. Gustafson was in contention for a medal during the opening leg. He had the fastest start, and split times of second and fourth places. But the Massena, N.Y. luger encountered difficulty finishing the run and did not qualify for another.

Wendl and Arlt, also three-time World Champions, had the two fastest runs of the race – 40.910 and 40.999 seconds – for a combined 1 minute, 21.909 seconds. The runner-up sled of Toni Eggert and Sascha Benecken, with a mistake at the start of the first leg, was 0.156 of a second off the pace, yet still lead the overall World Cup standings by a substantial margin with two races remaining on the schedule. Mathematically, it will be difficult for them to lose.

Mortensen, of Huntington Station, N.Y., and Terdiman, of Berwick, Pa., posted 1:22.798, moving up three spots in the final heat. The Americans are third in the overall World Cup standings.

Loch, the dominant figure in men’s racing since 2009, had just a sprint victory to his credit until Saturday. Some observers have attributed the results to a new sled and the time it takes to acclimate.

On the World Cup season, the Americans are led by West in a career-high fifth place, Mazdzer 11th and Morris 16th.

From Oberhof, the tour will jet off to PyeongChang for two weeks on the 2018 Olympic track, including a World Cup series February 18-19.