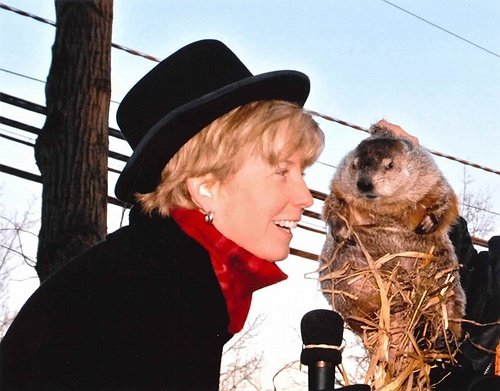 Long Island's furry meteorologist, Malverne Mel, came out of his hole early this morning to take a peek at his shadow to determine what the rest of the Winter season will look like. What he saw, especially with today’s weather, won’t seem like too much of a surprise, six more weeks of Winter.

Last year on Groundhog Day Malverne Mel predicted an early Spring and the year before that a longer Winter.

Sadly, in lieu of the bad weather, for the first time in 19 years Holtsville Hal’s Groundhog Day celebration had to be cancelled this year. Though the Holtsville Ecology Center stated it was not an easy choice to make, in order to keep everyone safe and off of the roads during the snow, rain and potential freezing over period, it was a decision that had to be made.

There was some dissent of opinion this year though with the other famous nearby regional groundhogs.

Staten Island Chuck and Punxsutawney Phil were in disagreement today with Chuck predicting an early Spring and Phil, in agreement with Malverne Mel, predicting six more weeks of Winter.

This year both Holtsville Hal and Malverne Mel were also honored with being chosen as one of Weather.com’s Top 11 Groundhogs to Watch!