DA Rice to Victims of Domestic Violence: ‘You Are Not Alone’ 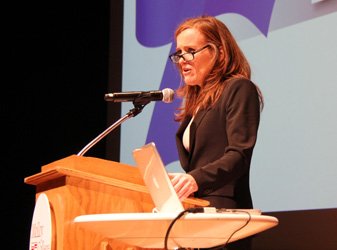 Rockville Centre, NY - January 31st, 2014 - District Attorney Kathleen Rice gave a speech at Molloy College on Wednesday night to speak about her office’s ongoing efforts to prosecute those responsible for relationship and domestic violence, and to help victims of abuse with the latest technological advances, legal tools and social services.

“I’ve focused on the prosecution side of domestic violence, but as I mentioned and as you know from everyone here, it’s not just about punishing the bad guys,” DA Rice said. “It’s about protecting victims, about making them whole, and helping them lead happy and productive lives free from violence and abuse.”

At the event at the school’s Rockville Centre campus, DA Rice called attention to the challenge of preventing and prosecuting cases of relationship and domestic violence.

“The obstacles in prosecuting domestic violence cases are many. One of the most common kinds is the uncooperative victim,” DA Rice said. “There will be an altercation, and either the victim or someone who hears or sees something will call the police, and when the police show up or later when the district attorney’s office calls the victim will say, ‘Nothing’s wrong.’”

However, DA Rice said that prosecutors can move forward using evidence of abuse even when victims refuse to testify.

DA Rice spoke about technology’s increasing role in giving victims more confidence that when they report what’s happening to them, they will not be alone – no matter where the incident might occur. Those tools include old-fashioned technology such as alarms and panic buttons, or more advanced tools like a portable GPS-based panic button so that a direct link to 911 follows potential victims wherever they are.

In addition to the latest technological tools, DA Rice’s office has a special domestic violence court where victims are also given extra protection and assistance.

“We can issue orders of protection to help victims, and while such an order isn’t a physical barrier, it is a legally enforceable barrier that’s proven to work as a deterrent,” DA Rice said. “Domestic violence victims also have access to financial assistance, housing relocation resources, job placement resources, medical care and other resources thanks to federal and state grants designed to help victims.”