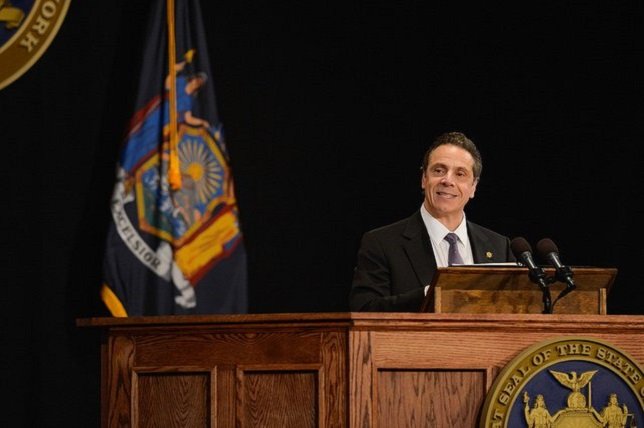 Massapequa, NY - January 27, 2016 - Governor Andrew M. Cuomo and U.S. Senator Charles E. Schumer today announced New York State will conduct testing to further analyze the nature of the Northrop Grumman plume in Massapequa. In addition, the state has ordered Northrop Grumman and the U.S. Navy to open access to monitoring wells in order to obtain the samples that will be tested by the state and Massapequa Water District.

"There have been too many questions about the extent of contamination caused by this plume and residents are frustrated with the lack of answers from the Navy and Northrop Grumman," Governor Cuomo said. "They are right and today, with Senator Schumer, we are stepping in to conduct our own testing, as well as enable local officials to undergo their own independent analysis. This action will allow us to develop an action plan to ensure that the health and safety of this community is protected.”

"New York State's swift move to require testing of the wells and access to vital data on any potential contamination is just what the doctor ordered for the worried residents of Massapequa, Bethpage and South Farmingdale," U.S. Senator Charles E. Schumer said. "Kudos to Governor Cuomo and the DEC for stepping up to the plate and delivering just the kind of real information and access to test wells that the Navy and Northrop Grumman had been stonewalling the water districts on. I will work with the Governor, Assemblymember Saladino and the water districts to keep the Navy's-and-Grumman's feet to the fire when it comes to more actively monitoring and remediating this toxic plume that threatens the drinking water of so many Long Islanders."

The New York State Department of Environmental Conservation will obtain groundwater samples from monitoring wells installed and maintained by Northrop Grumman and the U.S. Navy to perform a compound specific isotope analysis (CSIA) of water samples from the Grumman plume. CSIA is a relatively new and highly specialized analysis of the isotopic composition of a chemical.

The Department of Environmental Conservation will collect and test samples from six priority monitoring wells. Additionally, the Massapequa Water District will also be provided the opportunity to sample, so it can conduct its own analysis. State testing will be expanded as warranted and results will be shared with the water districts as soon as they are available.

New York State Department of Environmental Conservation Acting Commissioner Basil Seggos said, "DEC's cutting-edge analysis of the Grumman plume will allow us to better understand and address the nature of contamination. In the future, Northrop Grumman and the Navy also need to be transparent and quickly share any information requested by the water districts."

The Grumman plume is one mile wide and three miles long, extends to depths in excess of 600 feet and emanates from the original 635-acre Grumman facility. The plume impacts some water supply wells in Nassau County, which have since been equipped with treatment systems. Currently, Massapequa Water District’s drinking water wells are not impacted by the plume. In addition, sentinels wells located north of the district’s water well have not yet detected contamination.

The Department of Environmental Conservation has worked closely with the Navy and Northrop Grumman to address contamination from the former Grumman/Navy facilities by developing enforceable remedial agreements to address the plume. Pursuant to the agreements, the Navy is actively tracking down and working to remediate hot spots in the plume.

Assemblyman Joseph Saladino said, "I greatly appreciate Governor Cuomo's efforts on behalf of our communities. His motivation to ensure that our water districts receive these samples and the information they need is a huge step in the right direction. I have been working on this issue for years and understand that it is beneficial to work with Governor Cuomo, US Senator Schumer and all of our officials in order to protect the life essential resource that is our drinking water. There is a finite amount of clean water in our aquifer and we will not stand for the contamination to grow. Ultimately the best end result will be for complete hydraulic containment and remediation of these plumes and a guarantee that the responsible parties, and not the taxpayers, will pay for this clean up. This is great news that signals we are moving closer toward getting the plume cleaned up responsibly, ethically and completely."

Nassau County Executive Ed Mangano said, "The public has been kept in the dark about the Northrop Grumman plume for long enough. It’s time we got answers about this environmental contamination and what needs to be done to protect the health and safety of our residents. Governor Cuomo and Senator Schumer stood up to make sure that happens, and I’m proud to see them fighting alongside us to protect Nassau communities."

Massapequa Water District Superintendent Stanley Carey said, "I thank Governor Cuomo and DEC for granting us access to samples from the plume monitoring wells. We look forward to continuing to work with New York State to protect Massapequa's water wells."