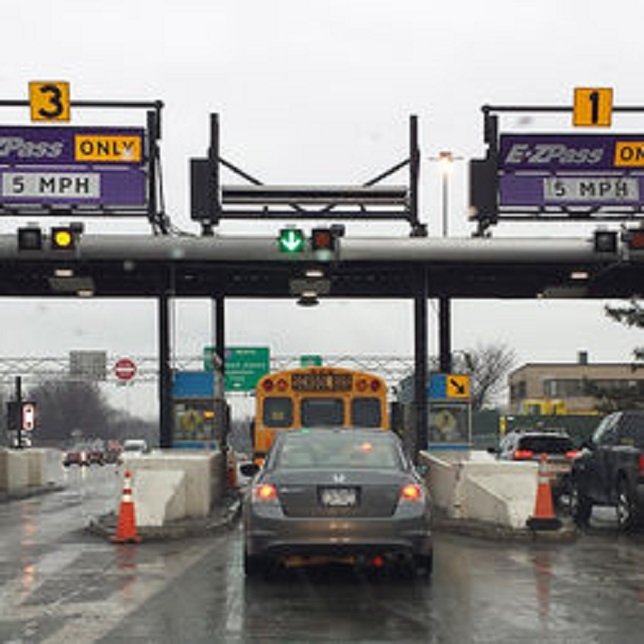 New Yorkers who persistently fail to pay tolls can have their registrations suspended by the DMV.

Albany, NY - January 20, 2016 - Governor Andrew M. Cuomo today announced the adoption of a regulation to take action against motorists who persistently evade paying tolls and fees on New York's roadways. The regulation allows the New York State Department of Motor Vehicles to suspend the registration of motorists who fail to pay five tolls, fees, and other charges resulting from violations on different days, within a period of 18 months, and ignore toll authorities' repeated notices. The regulation takes effect immediately and was first proposed by the Department of Motor Vehicles in November.

"We are sending a clear message that New York State will not tolerate toll violators," Governor Cuomo said. "For far too long, these scofflaws have skirted their responsibility of helping maintain the state's transportation network and placed the burden on the backs of law-abiding motorists. With this regulation adopted, we can now ensure that those who travel in New York State pay their fair share."

New York's tolling authorities -- including the New York State Thruway Authority, the Port Authority of New York and New Jersey, the New York State Bridge Authority, and Metropolitan Transportation Authority (MTA) Bridges and Tunnels -- report that non-payment of tolls, even with violation notices being sent, is a persistent challenge. Within an 18-month period, these authorities found nearly 35,000 cases where violators accrued five or more unpaid toll violations, resulting in about $16.5 million in lost revenue annually.

As they have prior to the adoption of this regulation, tolling authorities will send violators notices for each toll violation, which include the amount owed, how to pay, and how to dispute the alleged violation. If the violator fails to pay the tolls, fees or other charges, or have such tolls, fees or charges dismissed or transferred in response to the multiple notices, the tolling authority will refer the violator to the Department of Motor Vehicles.

Prior to the suspension taking effect, the registrant may request a hearing before a Department of Motor Vehicles administrative law judge. If the registrant requests a hearing, the suspension will not take effect until the conclusion of the hearing. If no hearing is requested, the suspension will take effect as declared in the notice, and will remain in effect until the tolling authority notifies the Department of Motor Vehicles that the motorist has paid the outstanding tolls, fees, and other charges.

New York State Department of Motor Vehicles Executive Deputy Commissioner Terri Egan said, "New York State Vehicle and Traffic Law gives DMV the authority to suspend registrations for habitual and persistent violations of the law. We will continue to partner with New York's tolling agencies to show violators that there are consequences to taking off without paying tolls."

Thruway Authority Interim Executive Director and Chief Operating Officer Maria C. Lehman, P.E. said, "This is a tremendous step forward to crack down on motorists who repeatedly disregard violation notices for the tolls that they owe. DMV's regulation will serve as an additional incentive for travelers to pay their tolls in a timely manner, thus creating a more level playing field for toll payers on our roadway."

Port Authority Executive Director Pat Foye said, "The Port Authority of New York and New Jersey applauds the significant penalty that Governor Cuomo's new regulation imposes, offering toll authorities another sanction to force toll deadbeats to pay up. It is simply unfair to the majority of law-abiding drivers who pay their tolls that some individuals consistently seek to flout the law. The potential suspension of their registrations should make toll cheats think twice."

New York State Bridge Authority Executive Director Joseph Ruggiero said, "The Governor is to be commended for taking action to make sure toll violators are held accountable. This effort will help ensure the revenue necessary to maintain our bridges for many years to come."

MTA Bridges and Tunnels Acting President Donald Spero said, "When scofflaws fail to pay their tolls, everyone else is forced to cover their share of the cost of maintaining and improving our seven bridges and two tunnels. Adopting this new regulation is good news for MTA Bridges and Tunnels and for the 800,000 vehicles that use our facilities on an average weekday. As we explore the expansion of all-electronic tolling, this regulation will ensure we can move traffic safely, quickly and efficiently while everyone pays their fair share."

Governor Cuomo recently proposed the largest investment in transportation infrastructure in Upstate New York history. Read more about his 2016 agenda, including a number of major projects to build, rebuild, and revitalize infrastructure across the state, here.