Acting Nassau County District Attorney Madeline Singas announced the appointment of two key members of her executive team to continue her office’s commitment to integrity and the fairest administration of justice. 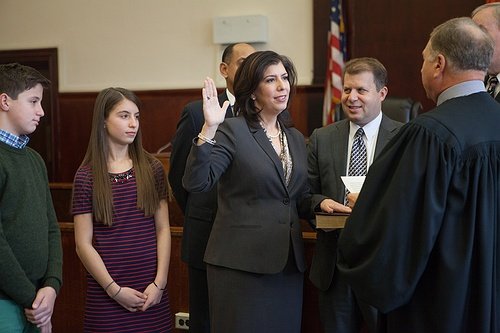 Photo of Madeline Singas being sworn in as Acting District Attorney of Nassau County.

“Making sure that Nassau County remains one of the safest big counties in the United States is my top priority, which is why I’m appointing these highly-experienced prosecutors to top positions in my office,” said Acting DA Singas. “Their combined decades of experience, and proven track record as prosecutors in Nassau County and beyond, ensure that my office will continue DA Rice’s commitment to protecting victims, holding criminals accountable, and keeping Nassau residents safe.”

Acting DA Singas appointed Albert Teichman, a career prosecutor with over four decades of experience, as Chief Assistant District Attorney. Teichman brings more than four decades of experience to the job, and will continue to be an incredible asset to the DA’s office. He will remain Executive Assistant District Attorney overseeing investigative operations, developing office policy and guidelines, and directing legal recruitment. Prior to joining the Nassau DA’s office, Teichman worked under three DAs in the Kings County District Attorney’s office and as General Counsel/Deputy Commission of the New York City Department of Investigations. He is a graduate of Ohio State University and the John Marshall Law School at Cleveland State University.

Maureen McCormick has been appointed to the position of Executive ADA in charge of intergovernmental relations. In that role, McCormick will interface with the DA office’s criminal justice partners including DCJS, the legislature, the police, the judiciary, the federal authorities, and other DAs’ offices. McCormick will remain chief of Acting DA Singas’ Vehicular Crimes Bureau, where she will continue the office’s focus on drunk, drugged, and distracted driving. Prior to joining the Nassau DA’s office, McCormick headed the Kings County DA’s Vehicular Crimes Bureau. She is a graduate of Siena College and St. John’s University Law School.