Patchogue 2014: Now's The Time for Change

After six years of planning- the New Village Project has started to take its course, enlivening the old village with a new one. 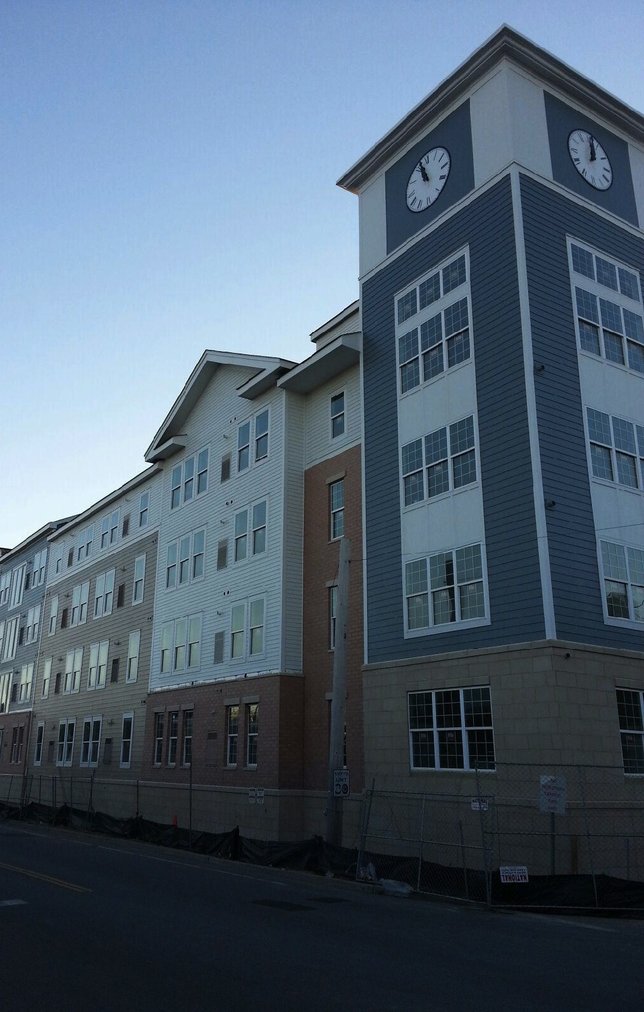 Like so many other downtowns on Long Island, Patchogue's has had its ups and downs. Twenty years ago, it was a shopping destination, with family-owned businesses such as Blum's, Sports Plaza and Swezey's Department Store at its heart. It was home to a movie theatre called Ward & Glynne’s Theater that opened in 1923, and a department store that brought in people from around the Island.

But in the 1980s, Patchogue’s downtown disintegrated. Ward & Glynne’s closed after a 12-screen theater opened nearby. Swezey’s could not withstand the onslaught of national chains and outlet centers and almost 110 years after its founding it closed its doors for good. A few of the long-time local shops hung on – Blum’s, the local swimwear and intimate apparel store has been serving the Patchogue community for four generations. But many storefronts weren't so lucky as they became vacant, becoming a blank canvas for artist to cover the windows with graffiti, leaving nothing but a "For Rent" sign hanging in the window.

A generation later, Patchogue's downtown has turned upside down, with restaurants and shops lining the once vacant storefronts, adding in a few bars and clubs to attract nightlife. It has become a growing arts community with its recent addition of the Artspace lofts.

Following the Artspace- after six years of planning- the New Village Project has started to take its course, enlivening the old village with a new one. New Village was initially proposed as a mixed-use project of rentals, condos, a hotel and retail stores. But as the $100 million project moved along, it was amended to be just a 291-unit apartment complex with retail stores on the first floor. Rentals will range from around $1,350 for a studio to $2,900 and up for three-bedroom units.

“We believe the New Village project represents a step in the right direction to meet the changing housing needs of Long Island,” said Christopher Kelly, director of marketing for TRITEC Real Estate, the project’s developer.

New Village takes up an entire city block at Patchogue's most important property, the historic Four Corners intersection. The site is the former home of Swezey's Department Store, a retail mainstay that brought a lot of foot traffic to downtown Patchogue and was a destination store until national chains, outlet centers and malls took over its turf. Declining sales forced the store to close in 2003. But some businesses outlasted the decline, including Reese's 1900 Pub and Delfiore Italian Pork Store, two family-owned businesses across the street from the New Village apartments. For businesses, the project is an opportunity to get a constant influx of new people.

Reese's, known for its delicious hamburgers, has the feel of an old Irish neighborhood public house, and its owners are happy to see the village revitalizing. "For years, the empty building that once occupied Swezey's was such an eyesore," said Joe Pine, one of the owners of Reese's. "I'm enthusiastic about the new building."

Pine has owned the pub for eight and a half years. He looks at his business as "more of a destination place, rather than a traffic one," but said he believes the new apartments will bring in more foot traffic, leading to new loyal customers.

Patchogue's downtown is no longer "a shopping town," Pine said. The new visitors "come here for different reasons now." The nightlife on Main Street has brought a new feel to the village, as bars, restaurants, a renovated theater, music venue and a nightclub attract young adults.

"Young people looking for a relatively affordable place to live and not ready or willing to buy a home, I believe, would love to be walking distance from the great restaurants and nightlife entertainment provided," said David Kennedy, executive director of the Greater Patchogue Chamber of Commerce. Ads for New Village, which appear in local print media, on the web, in social media and around the village itself, are aimed at the young professionals who are currently just visiting Main Street by the thousands each weekend. These people are looking for a place to live that is “cool,” Kennedy said.

William Howard, 35, an investor at 89 North Music Venue, has lived in Patchogue his whole life and looks at the downtown as being a cool place that went downhill. Wearing a bright orange sweatshirt that matched his energetic personality, he sat at a table in the music venue reminiscing about the downtown he used to visit during his childhood. "I always remember going to the old Ward & Glynne’s Theater as a little kid," Howard said.

For Howard, the new apartments, down the block from the venue, are something to be excited about. "I'm stoked,” Howard said, smiling. “Besides it helping us as a business, it will help the town as a whole."

One of Long Island’s biggest problems for decades has been the number of young professionals who leave because of the high cost of living, Kennedy said. New Village’s housing, affordable for young professionals if not for Patchogue’s poorer residents, is a main reason why planning organizations, such as Vision Long Island, have recognized Patchogue as a leader in what they call “smart growth” initiatives. Smart growth means building urban, suburban and rural communities with housing and transportation choices near jobs, shops and schools. This approach is designed to support local economies and protect the environment.

This is a reason why other downtown areas are using Patchogue’s initiatives as a blueprint for their own towns. In December 2012, the supervisor of Riverhead Town, Sean Walter, was quoted in Newsday describing a housing project on Riverhead's Main Street as  “following the Patchogue model.” Walter mentioned the once-beleaguered Patchogue Village on the South Shore as a potential model for downtown Riverhead again during political debates at Riverhead’s Suffolk Theater in November, according to reports in the Riverhead News-Review.

Patchogue's downtown has come a long way since its lowest point more than five years ago. On Nov. 8, 2008, when Marcelo Lucero, an Ecuadorean immigrant, was stabbed to death by a white teenager named Jeffrey Conroy. Conroy and six others surrounded and attacked Lucero in a Patchogue parking lot shortly before midnight. Conroy was sentenced on May 26, 2010, to 25 years in prison.

Patchogue’s recent success includes another essential housing project, known as Artspace, which opened in 2011. Home to 45 studios, one-, two- and three-bedroom industrial loft-like units as well as a number of fine art galleries, the project was sought after by dozens of communities. Suffolk County, which helped sponsor this project, narrowed it down between Riverhead and Patchogue, according to Marian Russo, executive director of the Village of Patchogue Community Development Agency. Artspace's mission is to create, foster and preserve affordable space for artist and arts organizations, according to its website. Rent in Artspace projects is determined by affordable housing guidelines set forth by the federal Department of Housing and Urban Development. Monthly prices for the Patchogue units range from $888 to $1,569, plus metered utilities. Artspace is estimated to be 85 percent occupied, according to an Artspace consultant.

Long Island’s ongoing downtown revivals are not fully based on retail but rather on creating an “experience,” Kennedy said.

Patchogue is making a big effort to offer an experience that is aimed toward a variety of ages. “The New Village project will attract both young professionals and aging baby boomers who are looking to live in a walkable, thriving downtown that is close to mass transit -- which is great for Long Island,” said Danielle Hundt, communications coordinator at the Rauch Foundation, a Long Island-based family foundation that invests in ideas and organizations that spark and sustain systemic change in communities, according to its website.

With his down-to-earth nature and warm smile, William Howard, the music impresario, is eager to see what the new apartments bring to the downtown. As he sees it, Patchogue is already offering nice places to live, interesting restaurants and enjoyable nightlife.

"The more people you bring in, the more it grows," Howard said.

"I wish the downtown was how it is now when I was younger."