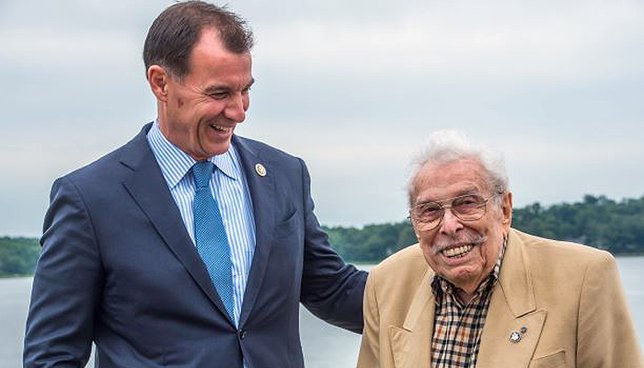 Long Island, NY - January 4, 2019 - Congressman Tom Suozzi recognized former New York Congressman Lester Wolff’s 100th Birthday, along with Mr. Wolff’s achievements, in the Congressional Record, by reintroducing a bill to memorialize the Congressman’s courageous fight to protect the sanctity of the Long Island Sound.
“On behalf of the institution he served, and all his colleagues, past and present, I wish Lester a happy 100th year and many more,” said Congressman Suozzi. “The Long Island Sound is our national park and, without Lester’s tenacity and willingness to stand up to powerful interests, the environmental security of the Sound would have been compromised. It is important to recognize an early champion of New York’s environmental movement and that’s why I’m reintroducing a bill today to recognize my colleague’s invaluable contributions.”
In honor of Mr. Wolff’s monumental contributions to the preservation and protection of our environment, especially on Long Island’s beautiful North Shore, Congressman Suozzi is proposing legislation that will rename of the Oyster Bay National Wildlife Refuge to the Congressman Lester Wolff National Wildlife Refuge. In the last Congress, the House passed an identical bill with 385 votes in favor.
In 1964, Congressman Wolff was elected to the US House of Representatives. He went on to the serve the people of New York for 16 illustrious years. As a Congressman, he is remembered for playing an active role in foreign affairs, but on Long Island, he is also remembered for standing up to powerful interests to protect the environment.
In 1967, the New York State Legislature – at the insistence of then Governor Nelson Rockefeller and master planner Robert Moses – authorized a bridge across the Long Island Sound. The Congressman immediately saw that this bridge would despoil the pristine and precious resource of the Long Island Sound and soon found himself at the center of an enormous political fight.
He eventually won this fight and the Oyster Bay Wildlife Refuge was born.  These precious wetlands – at Congressman Lester Wolff’s urging – were protected in 1968.
Congressman Wolff was born in New York City on January 4, 1919. He served his country during World War II, achieving the rank of Colonel in the Civil Air Patrol. In 2014, he was awarded the Congressional Gold Medal, the highest civilian award.