No Leaks Reported From Oil Rig Run Aground Off Alaskan Coast

The Coast Guard has reported that there are no visible leaks of oil or natural gas from an oil barge that ran aground off the Alaskan coast during a powerful storm on Monday.

No oil or gas spills were reported as of late Tuesday night, following the rescue of the crew of a drilling rig Shell that ran aground on Kodiak’s rocky shore during a powerful storm on Monday around 9 p.m..  Earlier on Monday, the crew was rescued and brought to safety by the Coast Guard. 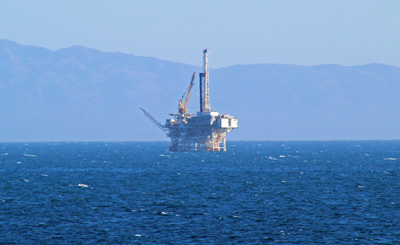 Shell planned to use the $290 million rig, called Kulluk, to begin a controversial drilling project on Alaska’s Arctic coast, according to the Washington Post.  The Coast Guard reported that their tugboats were unable to keep the rig from hitting the coast as it was battered by high winds.
Coast Guard Captain Paul Mehler III said the barge remained sound, with no sign of a breach.  “There is no sign of a release of any product,” he said at a press conference, after the Coast Guard surveyed the air in a helicopter.
The Kulluk had approximately 143,000 gallons of diesel fuel and 12,000 gallons of combined lube oil and hydraulic fluids on board, when it struck land off an uninhabitable island about 200 miles south of Anchorage.
The barge was being towed back to it’s winter home in Seattle, after ceasing operation in the Beaufort Sea when it was hit by the storm.
The Unified Incident Command, a joint effort between Shell, the Coast Guard and various local and state officials are now operating a command center to monitor the rig.  According to a spokesperson at the command, nearly 500 are responding to the incident, with more expected to join the response efforts.
The weather has not yet abated, forcing a delay on recovering the barge.  According to the National Weather Service, the sea level is expected to drop from 24 feet to 11 feet as the weather improves near the end of the week.
Alaskans are being asked by the state’s Department of Environmental Conservation to watch for and report any signs of oil leaks near the shores.  There have been no reports of wildlife impact as of Tuesday.
Despite the setback, it does not appear that Shell is looking to alter its plans to complete the controversial arctic oil exploration, especially as sea ice has hit record lows in 2012, making more opportunities to recover formerly unreachable natural gas and oil.
The company did not meet its goals of establishing six drilling sites in the region last summer, but plans to carry on once sea ice melts, which is expected to occur near July.
Share your thoughts on this article by posting a comment below.