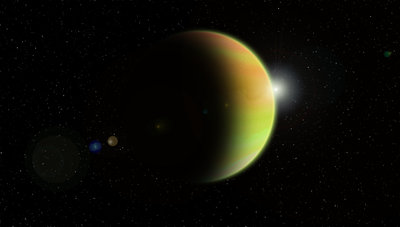 Last week marked several different historical events in the world of science and astronomy. Four of the most interesting and groundbreaking discoveries in recent history were made. Here’s a quick summary of each discovery:

DNA Photographed:
For the first time in history a scientist was able to capture an actual photograph of the double helix structure of DNA (the molecules that determine the genetic makeup of all living things). Enzo Di Fabrizio, a physics professor at Magna Graecia University in Catanzaro, Italy, used an electron microscope to take the picture.

Fabrizio’s images are of several different interwoven strands of DNA, but he believes that with the use of more sensitive equipment and low energy electrons, they will soon be able to take photos of individual strands of DNA.

Huge Quasar Discovered:
A quasar with an energy outflow of more than 100 times that of the entire Milky Way galaxy was discovered by researchers at Virginia Tech. The quasar – known as SDSS J1106+1939 – is now the biggest ever discovered, and may answer questions concerning the mass of galaxies and how they are linked to the massive black holes that lie in their centers.

Super Massive Black Hole Discovered:
One of the largest black holes ever was observed by researchers the University of Texas. The black hole is located in NGC 1277, which is a small galaxy about 250 million light years from earth. It has an “event horizon” – the point at which nothing can escape, not even light – with a diameter 11 times greater than Neptune’s orbit around the sun, and its mass is equal 17 billion suns.

According to researchers, the discovery of this black hole may help answer questions as to how galaxies are formed. Black holes cannot be observed directly, but rather by their interaction with surrounding objects and light.

Messenger Finds Ice on Mercury:
In a press conference, NASA reported that the Messenger probe has found ice near the North Pole of Mercury. The spacecraft – which is currently orbiting Mercury – made the observation by measuring hydrogen concentrations on the planet. They estimate the total amount of ice is somewhere between one billion and one trillion tons.

Mercury is the closest planet to the sun, and temperatures near its equator can reach up to 800 degrees Fahrenheit. But up near the North Pole, the sun never shines and temperatures can dip down to minus 370 degrees.