Long Islanders, already panicking from the gas shortage caused by Hurricane Sandy, may have to wait even longer for a return to normal due to the upcoming nor'easter. 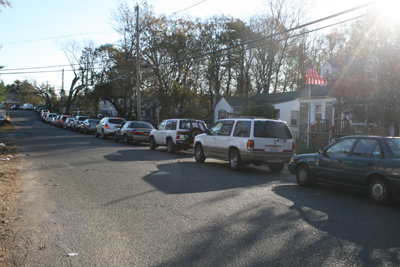 Gov. Cuomo expects the upcoming Nor’easter to exacerbate the gas crisis facing Long Islanders following Hurricane Sandy.  While lines at the pumps have significantly decreased, Cuomo says that people are still buying more gas in advance of the next storm than usual.

No officials have yet provided an estimate for when Long Islanders can expect the lines at the pump to return to normal.
The Nor’easter brings with it the possibility of elevated sea levels, up to 60 mph winds, heavy rains and even the possibility of snow.  In addition to worsening the gas shortage, the governor also expects that this storm will undo or delay the ongoing repairs following last week’s Hurricane Sandy that devastated Long Island’s South Shore and left hundreds of thousands of LIPA customers without power.
On Monday the governor requested that President Barack Obama ease restrictions that would allow larger quantities of gasoline to be delivered to neighboring states, including Delaware and Connecticut.  Though millions of gallons of gas is now being delivered to Long Island, even feul delivery trucks are forced to wait for hours to reload, and long lines at the pumps are hindered distribution.
The gas crisis has lead to arrests in the area, including a teenager from East Setauket who threatened a gas station attendant with a knife, as well as a fuel company owner who was arrested for selling gas directly from his truck without the proper permits and for improperly handling flammable liquids.
According to AAA, the average price for a gallon of gas on Long Island has dropped 10 cents from last month, and now rests at $4.03.
Share your thoughts on this article by posting your comment below or visiting our Long Island Living discussion forum.