Nassau Legis. Dave Denenberg and Suffolk Legis. Steve Stern have proposed legislation requiring local gas stations to install back-up power in order to prevent a similar gas crisis such as the one caused by Superstorm ...

Superstorm Sandy landed several devastating blows to Long Islanders, not the least of which was the days long gas crisis, during which motorists waited in lines of cars stretching for miles, and which is still being mitigated by the odd-even gas rationing in New York.  Several factors, including gas hoarding and power outages at area gas stations served to heighten the panic among motorists and LIPA customers without power operated their homes on gas-burning generators. 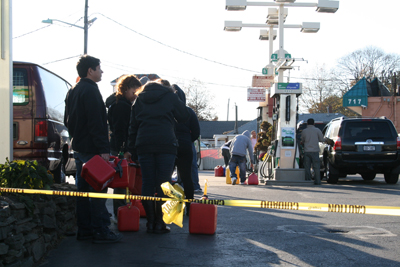 Nearly 80 percent of Long Island gas stations lost power following Sandy.  While in many cases gas was available at the station, the loss of power made the stations unable to supply the fuel to customers.  Stations that maintained power throughout the storm were quickly sold out of their remaining fuel supplies, and the closure of the area’s four gas terminals meant days before shipments became available.
Now, two legislators from Nassau and Suffolk counties are proposing a bill that requires gas stations in the two counties to establish back-up power in order to prevent a subsequent gas crisis in a future state of emergency.  Specifically, the bill would require that gas stations operators install a “transfer switch” that would enable fuel to be supplied in the absence of an operational electric grid. Instead, fuel pumps would be energized by batteries or gas-powered generators.
Precedent for such a law comes from Florida which has similar requirements for the state’s gas stations in the event of power failure.
The bill proposed by Nassau Legis. Dave Denenberg (D-Merrick) and Suffolk Legis. Steve Stern (D-Huntington) would “prevent a power outage from becoming a gas shortage,” according to Denenberg.  The legislators have also called for federal grants to help gas station operations afford the costs of installing the back-up power, as well as the Suffolk County Industrial Development Agency to help local stations.
A fine of $500 has also been proposed as a countermeasure for gas station operators who do not comply with the law.  The law could go into effect as early as July 1, 2013 in Nassau County if the bill is approved.  In Suffolk County, the law would take effect six months after its passage by the County Legislature.
Share your thoughts on this article by posting your comment below or by visiting our Long Island Living discussion forum.