A Trek Through NYZ Apocalypse: An Interactive Experience Unlike Any Haunted House

Offering thrills like no other haunt, there's little question why NYZ is open year-round. 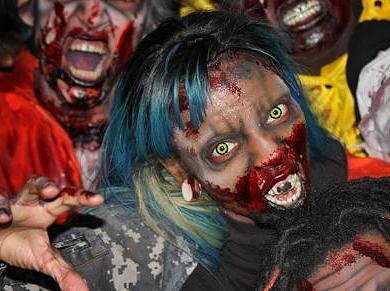 NYZ Apocalypse is a unique zombie-hunting experience unlike any other haunted attraction on Long Island. For Halloween enthusiasts seeking a more engaging way to celebrate the season than a traditional haunted house it is the perfect combination of scares, thrills, and interactive theater to get your adrenaline pumping! When you try to escape the Apollo Prison System underneath NYZ you aren’t left to simply flee from the monsters chasing after you, you’re given the weapons to fight back against the zombie hordes, as well as a fair amount of ammunition to help you make it out alive.

Highlights
NYZ is an interactive adventure, making it far different from traditional haunted houses. The actors are all committed to their roles, allowing patrons to fully immerse themselves in the experience.

Line Queue Entertainment
Even before guests enter the building, the staff at NYZ will be engaging them in order to both explain what to expect inside and to entertain the crowd. The NYZ experience begins long before anyone is handed a gun.

Appropriate For: Teens and Adults. There are also select daytime activities for kids and families this October.

Location & Visibility: NYZ is conveniently located on Commack Road near the Tanger Outlets; however, it is in the back of the building and may be difficult to spot. The front of the building is labeled “Strike Force Sports” in large lettering, which is easier to see than the NYZ sign found closer to the street.

Parking: There is a large parking lot in the back of the building, and there are no parking fees.

A Deeper Look
From the moment you step on to the premises at NYZ the staff is in-character and ready to entertain you while explaining exactly what you can expect to see and do once you enter the Apollo Prison System—a dilapidated facility that has become overrun by a massive horde of super zombies. The zombies, as you will discover in greater detail, are the result of attempts to engineer genetically altered super soldiers; of course, these experiments have all gone horribly wrong. Now, with little other choice, the facility is enlisting the aid of anyone willing and able to help hunt down the monsters lurking beneath the surface.

Those who choose to come to NYZ will find that not everyone on hand is thrilled to see them; the staff is already on edge from trying to stave off the zombies below and having to ask civilians for help certainly doesn’t seem to lift their spirits. Nonetheless, they will give each volunteer a full breakdown of what has happened to the Apollo and how he or she can help fight against the impending zombie apocalypse it has initiated. You can expect a fair bit of foul language and name-calling to be thrown around—these workers are scared out of their wits, after all, and some seem to be on the brink of utter madness—none of which should be taken personally. Every step along the path to the underground prison system is designed to set the stage for the main attraction, and these irritable employees go a long way in making the experience feel more authentic.  Though some staff members may appear angry and irritable, their fear and anguish over the predicament through which they must suffer is equally apparent. That they would lash out at those around them is no surprise; rather, it highlights the dire situation in which the Apollo has been placed.

Once your team of 3-5 newly minted soldiers has been processed, a man in military garb will give you one final chance to turn around before taking you into the armory. So long as no one on your team chickens out, you’ll each be given a laser riffle and a limited supply of ammunition to help you get through the entrance of the Apollo Prison System. One brief, albeit shaky elevator ride later you’ll be on your way to through the underground complex. It should come as no great shock that the zombies will be right in front of you almost immediately after stepping out from the elevator, forcing your team to open fire as you scramble down the narrow hallways. The zombies will fall back as you shoot them, but you must move quickly as it does not take long for them to gather their bearings and chase after you again.

One twist after another, the sprawling complex will have you frantically looking around every corner, never knowing where the next attack will come from. The facility is quite literally crawling with zombies, serving to ratchet up the tension immensely and keep patrons on their toes the whole way through. Along the way you will meet several other soldiers who will aid you in your struggle to make it back to the surface alive; each one will reload your guns to give you a fighting chance against the next batch of zombies, and some may even come with you briefly to shoot a few monsters themselves.

Should you manage to escape the Apollo in one piece, your team will be given a chance to review its performance. Each member’s number of zombies shot, accuracy, and times “bitten” by one of the infected is tracked, allowing them to compare their stats at the end and see who got the highest score. Be wary of anyone who was bitten below, however; even if your friends took down a high volume of zombies it may be only a matter of time before they too become infected!

NYZ is truly an experience unlike any other. It is a thrilling trek through winding paths infected with terrifying zombies. For fans of Halloween, Horror movies, laser tag, or air soft, this is an attraction that must be experienced. Fortunately it is open year-round, which leaves plenty of opportunities to go on an electrifying zombie hunt, but what better time could there be than at the peak of haunt season? Incredibly detailed sets, persistent zombies, and actors dedicate to their characters will almost have you believing that you’re in a real-life zombie movie!

For more information on visiting NYZ Apocalypse this Halloween Season, including dates, times, photos, and more, be sure to check out their profile page.

Would you like to find out more about haunted attractions around Long Island?
Then check out our 2015 Haunted House Reviews!