Long Island raised Shifu Gregg Zilb of Authentic Shaolin Kung Fu Studios in Ronkonkoma has made his first motion picture appearance in Lawrence Page's 2006 DVD release, Blood of a Champion. The film, starring Bokeem Woodbine and Deborah Cox, and scored by the RZA, features Shadow (Woodbine) as an ex-con just released from a ten year prison sentence. Frustrated and jaded with working-class lifestyle, Shadow delves deep into the world of underground fighting where he encounters street fighter, West Side Willy (Zilb) in a climactic final fight scene.

Shifu Gregg was contacted in under twenty four hours of shooting.
"I had to go there that night, put the fight scene together, and [shoot] it that night," said Zilb, "it was pretty hectic."

In addition to Blood of a Champion, Shifu Gregg has performed in several theatre projects including Voice of the Dragon, a martial arts play originally developed and supported by the Guggenheim Museum's Works and Process series. Voice of the Dragon, co-written, scored, and created by Fred Ho, toured through thirty three venues across the United States and featured Shifu Gregg Zilb as Barbarian Butcher. 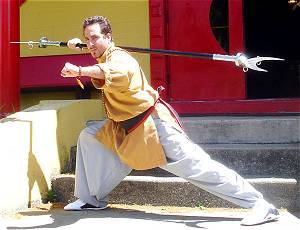 In his twenty five year martial arts career, Shifu Gregg has been inducted into several halls of fame, won eight grand championships and over forty first place trophies, and is the Activities Coordinator of the U.I.K.F. (United International Kung Fu Federation), a non-profit organization formed by practitioners, for practitioners to exchange ideas and information to keep Chinese martial arts thriving.

Shaolin Kung Fu is often considered the heart of all martial arts and its rich and exciting history can be traced over a thousand years. The original Shaolin temple is located in the forest in Song Shan Mountain in China's Henan Province, which is why it is called Shaolin ("Shao" meaning "young" or "new", and "Lin" meaning "forest"). It is said that in 500-600 A.D., Ta Mo (Boddhidarma) taught the Shaolin Ch'an (Zen) Buddhist Monks muscle tendon strengthening, bone marrow washing, and the Eighteen Hands of the Lohan to strengthen them for strenuous hours of sitting meditation. Shifu Gregg Zilb is one of the few instructors on Long Island who teaches the Eighteen Hands of the Lohan.

Through dedication to the Shaolin martial arts and over two decades of intensive training, Farmingville raised, Shifu Gregg Zilb has gained recognition. He will collaborate with Fred Ho in 2007 to bring another martial arts play to the stage.

---------------
Jason Matthew Porta is a freelancer writer born and raised in Smithtown, New York. He began his writing career in elementary school. Jason continues to share his gift of the pen by writing articles of interest for various publications including LongIsland.com