Explore the infinite night sky this spring on L.I. as temperatures finally begin to rise! 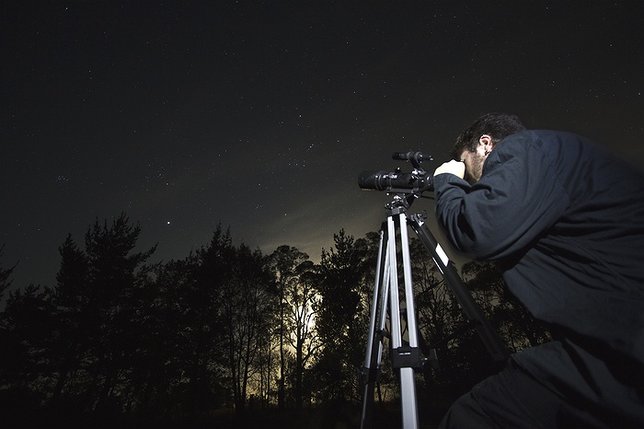 Why not go get a closer look at the stars!

With the changing of the seasons comes more time to spend outside on Long Island! One fun, educational, and awe-inspiring, activity to do on the Island is stargazing! From simply stepping outside in your own backyard to look up at the stars, or heading to an observatory on Long Island to get a closer look at our moon and the other planets that inhabit our solar system, there’s nothing quite as beautiful as the illuminating night sky on a dark, clear night.
There are also two springtime meteor showers taking place this season to look forward to, the Lyrid Meteor Shower and the Eta Aquarids Meteor Shower!
From approximately April 16th to 25th, the Lyrids, an unpredictable meteor shower will be taking place, but because of it coinciding with the full moon, the meteors may be hard to view this year. On a very dark, moonless night 10-15 meteors tend to be seen but that number can, and has, risen to up to 100 per hour. Keep your eyes out during April 16th to 25th though, you may still be able to catch a glimpse or trail from the Lyrids!
During the first week of May, on the 5th and 6th to be exact, take a look up at the sky around dawn to get a look at the Eta Aquarids, a meteor shower that can generally be seen from anywhere on Earth. Those closer to the Southern Hemisphere though tend to be able to view more meteors than those situated in the Northern Hemisphere.
Can’t get enough of looking at the stars and learning about the solar system? Then check out these astronomical events happening soon on Long Island!
Public Stargazing at the Theodore Roosevelt Nature Center
Jones Beach State Park, Wantagh, NY 11793
Friday, April 15th from 7:30 PM - 9:30 PM
516-640-4433
$4 Per Person
Join members of the Amateur Observers' Society of NY as they observe the night sky of Long Island with the help of a few telescopes! Please note that reservations are recommended!
Astronomy Day 2016 at the Custer Institute & Observatory
1115 Main Bayview Rd, Southold, NY 11971
Saturday, April 16th from 12 PM - 12 AM
631-765-2626
$5 suggested donation for adults; $3 for children under 14 & free for members
Take part in all day family fun during the Custer Institute's Astronomy Day 2016! The event will feature solar and celestial observing, drone demonstrations, planetarium shows, observatory tours, crafts, rocket launches and much more!
View the Planets & Moon Through a Telescope at Northport Harbor Park
End of Main Street at Harbor, Northport, NY 11731
Daily thru Tuesday, August 16th from 7 PM - 9:30 PM
631-486-4818
Free Event
During nights with clear enough skies on Long Island, you can see the moon, Mars, Venus, Jupiter, Saturn, eclipses and sometimes even the International Space Station with the help of a powerful enough telescope! Take a look through one this spring and summer in Northport!
Astronomy and Space Week at the Cradle of Aviation
Charles Lindbergh Blvd., Garden City, NY 11530
Monday, April 25th thru Sunday, May 1st; Daily
516-572-4111
$14 / $12
This spring recess is all about outer space during the Cradle of Aviation's Astronomy and Space week! Learn about the Space Shuttle, NASA missions, make crafts, participate in space labs and more!
[Source: EarthSky]