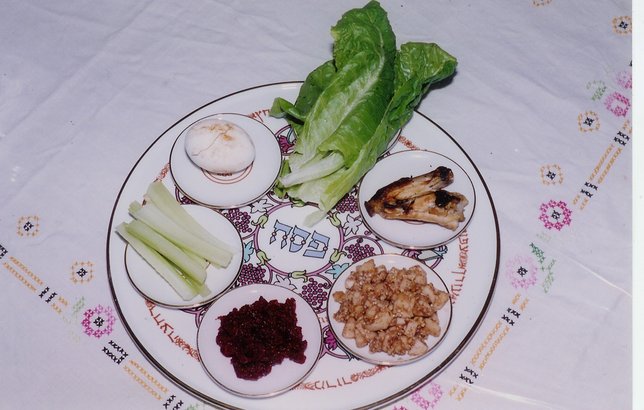 Passover is a Jewish holiday that celebrates the Jew people leaving slavery in Egypt and to beginning the long journey to Israel. Today, Jewish families celebrate the liberation with retelling the story of the life in Egypt leading up to their liberation with the help of Moses. This celebration is called a Seder.

So where does the name Passover come from? When the pharaoh refused to get the Jewish people go, Moses promised plagues to get set upon Egypt, beginning with the water turning into blood. The last and most dramatic plague was the slaying of the first born sons. A lamb was sacrificed it its blood was put on the doors of Jewish homes as to allow this last plague to pass over the Jewish people's homes.

The centerpiece to a Passover Seder is the Seder Plate. The Seder plate holds symbols of the holiday of Passover. These symbols include:

Many people are familiar with matzo during this holiday. During this holiday, people are not allowed to eat unleavened bread, bread that was not allow to rise. This became a tradition because when the Jews were leaving Egypt, they had no time to allow the bread to rise and matzo was created.

So, if you want a successful Seder it is important to follow a Haggadah, a special prayer book for Passover. In addition to following the prayer book, having good food would be great for your guests. You might be a great cook, but some people might want to consider the many catering options available for Passover:

No catering? There are a few Passover Seder events going on as well!

What is your favorite part of Passover? How will you be celebrating? Tell us in the comments below!
Photo credit: Foter / CC BY-SA