This Restaurant Was Behind One of Long Island's Most Viral Dishes

Noble Kitchen & Cocktails in Oceanside set the internet on fire with their chicken parm pizza. But there's a lot more to their story than that! 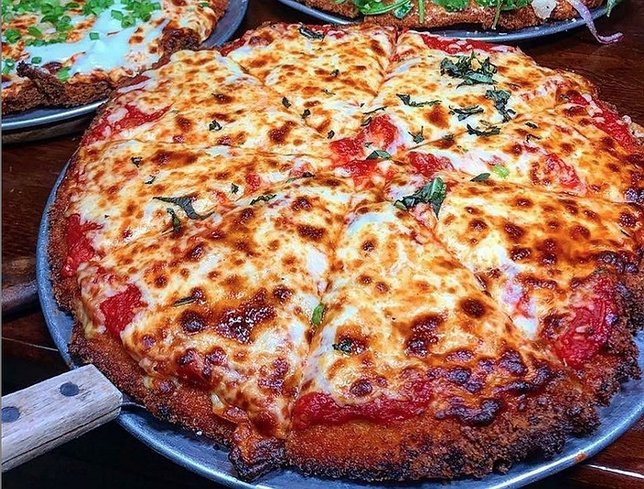 There’s something really approachable about the moment you walk into Noble. A sprawling bar is the first thing you’re greeted with, but if you’re me, it’s the fire torched old fashion that says “Hello!”

Peering around Noble’s humble yet oddly chic ambiance, you'll get a feeling that there is more to the story than just a typical neighborhood bistro. Noble is the brainchild of Rob DiSanto who learned everything he knows about food and hospitality in Italy – not by way of culinary school but by living and breathing the culture through his childhood.

“My brother Sal and I moved to Italy from the US when we were 10.” Rob explains, “My family opened up a small wood fired eatery in our small town of Fiumeefreddo Bruzio, it’s actually still open to this day. Ever since then I was captured by restaurant culture and knew it was where I belonged.”

Yet Noble isn’t an Italian restaurant at all. Instead, DiSantos has crafted an intriguing American Bistro that gives a warm nod to his Italian upbringing with homemade pastas and signature family recipes with Executive Chef Gigi, who hails from Florence, Italy himself.

“When Sal and I eventually moved back to the US, we spent all of our time either in a restaurant or at our family’s cabin in the Catskills. It was there that we started to experiment with cooking and curing meats.” Rob says, going further into how Noble was born. “In fact, sometimes we include our house-made cured meats in our meat & cheese board. We sold out quick this season, though!”

Their childhood in the Catskills seems to have lingering sentiment to the DiSanto brothers. The space is warm and cozy, just like a cabin and the reclaimed wood in the restaurant is from the Catskills too. Different rooms offer a variety of vibes, from dimly lit romance to the backyard patio relaxation. This makes Noble a solid choice for dates, family dinners or even special events.

Most of all, Rob’s feel good spirit has sunk into the very core of Noble. The pleasant waitstaff and downright delicious food has created a classic yet signature experience. What really stuck out was the attention to ingredients, the effort put into each dish and one insane entree that left me awe inspired: The Chicken Parmesan Pizza (NO CRUST).

The cross-breed of chicken cutlet and pizza set the internet on fire in 2017 and has since became one of Long Island's most viral dishes. It's kind of a must-have. But don't be afraid to venture outside of the staple as every dish has an inticing flavor, from the selection of fresh pastas to delicious meats.