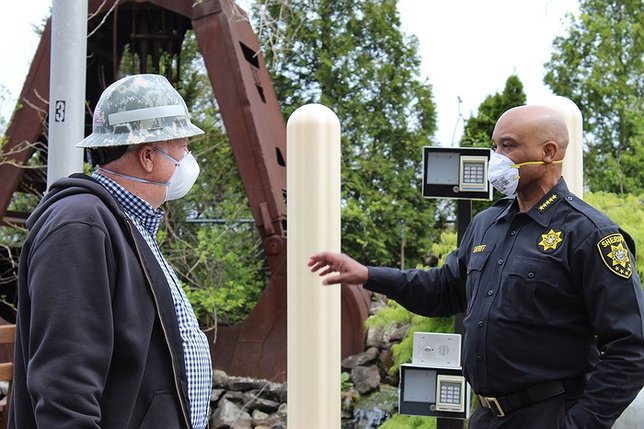 Suffolk County Sheriff Errol D. Toulon, Jr. has announced that the Sheriff’s Office released its Interim Reform and Reinvention Report pursuant to New York State Executive Order 203. The report is available on the Suffolk County Sheriff’s Office website at www.SuffolkSheriff.com, and although the public meeting portion has concluded, the Office is continuing to accept written comments. The report requires approval from the Suffolk County Legislature and must be sent to the Governor’s Office no later than April 1, 2021.

The Sheriff’s Office followed State guidance by developing its evaluation and report in phases while collaborating with community stakeholders. In September, the Office began facilitating conversations with members of its newly formed Community Advisory Board (CAB) to gain a better understanding of the public’s understanding of the role of the Sheriff’s Office. The Office held six of these sessions between September and January, which included Sheriff’s Office presentations followed by discussion. In February, the Office hosted four additional community meetings and asked for feedback on a series of proposed reforms in the seven areas of “Reforming and Reinventing Correctional Services,” “Reforming and Reinventing Police Service,” “Community Engagement,” “Recruitment, Diversification, and Retention,” “Sheriff’s Office Training,” “Officer Wellness,” and “Internal Affairs.”

The Sheriff’s Office is a reform-minded agency that has engaged with community partners in the non-profit, government, and educational sectors in substantive and collaborative ways over many years. The Office has five task forces comprised of community members, including the Sheriff’s Reentry Task Force with over 80 members, the Interfaith Council, the Community Advisory Board, the Deconstructing Task Force, and a small Student Advisory Board. Participants meet regularly with the County Sheriff and his staff and have played an integral role in shaping programs and policies for many years.

Sheriff Toulon stated, “The Suffolk County Sheriff’s Office is, and will continue to be, an agency driven to achieve excellence not by legislative mandate, but instead by its own standards and its obligation to the People of Suffolk County, New York.”

Sheriff Toulon viewed the Reform and Reinvention process as a valuable opportunity to reflect on the progress the Office has made in recent years, understand public concerns, and plan for the future. It was also an opportunity to educate the public about the role of the Sheriff’s Office. “With so many police agencies operating in Suffolk, the general public doesn’t fully understand how we affect their lives and the services we provide,” said Sheriff Toulon. The first section of the 78-page report describes the responsibilities of the Sheriff’s Office, its history, and how elected officeholders, Sheriff’s Office appointees, and long-time civil servants help shape policies. The report then discusses recent improvements in the 7 subject areas, noted deficiencies, goals and recommendations, and public input.

Highlights of some of the proposed reforms include: