Currently in the final phase of its expansion, Peconic Landing has repurposed its current set of generators and donated a generator to the Greenport School District. 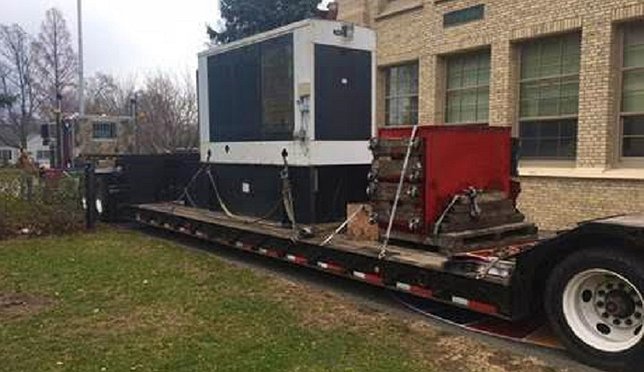 The generator has an estimated value of $20,000 and was used to power Peconic Landing’s Health Center.

Greenport, NY - December 22, 2016 - Currently in the final phase of its expansion, Peconic Landing has repurposed its current set of generators and donated a gently used Kohler 230kw generator to the Greenport School District.

The generator has an estimated value of $20,000 and was used to power Peconic Landing’s Health Center. The unit is 15-years-old and has less than 600 hours of recorded use. Peconic Landing utilized weekly, monthly, and annual maintenance schedules, keeping it well maintained. The unit was delivered to the school on December 6.

“On behalf of the Greenport School community and the Board of Education, we are very grateful for this extremely generous donation for the health and safety of all of the students, staff, and local residents,” said David Gamberg, Superintendent of Greenport Schools. “This clearly something that takes us to a whole other level of safety and we are very appreciative of Peconic Landing.”

Robert J. Syron, president and CEO of Peconic Landing said “the school serves as an emergency evacuation center for the town, and this generator is going to enable critical areas to operate 24 hours a day in any given emergency. Now it will be a more complete evacuation center.”

Peconic Landing will repurpose the second generator at Brecknock Hall, which serves as an evacuation site for local Eastern Long Island Hospital.

During Hurricane Sandy, Peconic Landing helped shelter 70 neighbors from the greater community, including patients from Eastern Long Island Hospital who were cared for at Brecknock Hall.

“The addition of a generator will allow us to better serve our neighbors during emergency situations,” said Mr. Syron. “Our members are proud to be able to enhance the safety and security of our North Fork natives during such times of need.”

Peconic Landing is an innovative, not-for-profit CCAC-CARF-accredited continuing care retirement community (CCRC) located on the waterfront in Greenport, N.Y., on the North Fork of Long Island. Among its long list of achievements, Peconic Landing is the only equity-based LifeCare community in the state of New York. It is a member of LeadingAge and LeadingAge New York and embraces a healthy, active lifestyle infused with a sense of exploration, creativity, and generosity of spirit.​