Governor Cuomo announced that the NYS Board for Historic Preservation recommended adding 26 properties, resources and districts to the State and National Registers of Historic Places. 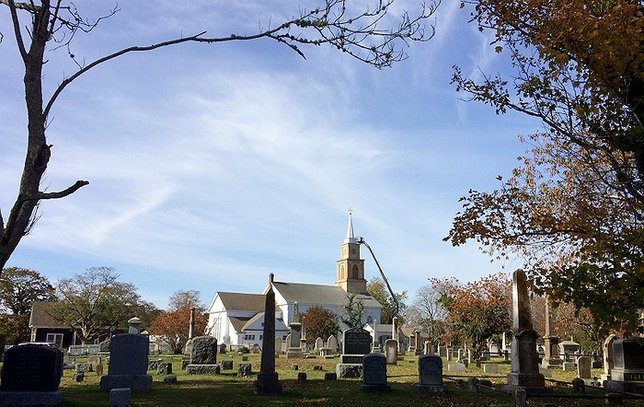 Albany, NY - December 20, 2016 - Governor Andrew M. Cuomo today announced that the New York State Board for Historic Preservation recommended adding 26 properties, resources and districts to the State and National Registers of Historic Places. The nominations reflect the remarkable breadth of New York’s history, ranging from the famous site of the Woodstock Music Festival, to a massive hydroelectric plant in Niagara, to a Romanesque Revival church in Syracuse.

"New York’s history is this nation’s history and we are leading the way to preserve the sites of significant events for future generations," Governor Cuomo said. "The nominations of these sites will help ensure that these parts of this state’s rich heritage remain viable and able to serve as destinations to attract visitors to every corner of this state."

Rose Harvey, Commissioner of the state Office of Parks, Recreation and Historic Preservation, said, "These nominations bring to light the diverse forces that have shaped New York’s history. Listing these important places from our past the recognition and support they deserve."

Woodstock Music Festival Site, Bethel – The three-day music and art festival, which took place on 600 acres of rolling farmland in rural Sullivan County in August 1969 is nationally significant in social history as the site of one of the most important cultural and social events of the second half of the 20th century.

DuBois Farmhouse, Poughkeepsie – Built circa 1770 and extensively modified in 1956, with electricity and a top-of-the-line kitchen, it became a model home for President Eisenhower’s “Operation Home Improvement,” a new initiative emphasizing the rehabilitation of existing housing stock rather than new construction.

Soldiers’ Memorial Fountain and Park, Poughkeepsie – The park was created in 1870 by community leaders who banded together to purchase land for a park and memorial to local Civil War veterans and war dead.

Onderdonck-Tallman-Budke and Vanderbilt-Budke-Traphagen Houses, Clarkstown – The Onderdonck House is considered one of Rockland County’s oldest sandstone dwellings, and appears to have largely arrived at its present footprint and gambrel-roofed form in the early 1790s while the earliest section of The Traphagen House dates to about 1820.

Bleecker Stadium and Swinburne Park, Albany – the recreational center developed over the course of more than a century—from the creation of an ornamental flower garden in the 1860s to the completion of the Swinburne Park skating rink in 1969, including the New Deal-era conversion of a reservoir into Bleecker Stadium.

Lincoln Park, Albany – The city of Albany authorized creation of a park in 1890 to replace an unsanitary neighborhood known as Martinville; the park today largely reflects a circulation and landscaping plan developed in 1913 by landscape architect Charles Downing Lay, and includes an early 1930s Colonial Revival-style bathhouse.

John S. Tilley Ladders Company building, Watervliet – The 1916 factory building was home to the nation’s oldest ladder manufacturer, which operated in Watervliet from 1855 until it ceased operations in 2004.

South Presbyterian Church, Syracuse – The large, intact Romanesque Revival church has dominated the corner of West Colvin and South Salina Streets since it opened in 1907.

Lakeview Cemetery, Skaneateles – The public cemetery that combined earlier burial grounds with a larger cemetery to meet the needs of an expanding community was established in 1871; a prominent Soldiers and Sailors Monument and Gothic-style chapel were added in 1895 and 1926 respectively.

Watrous Peck House, West Bloomfield – the excellent example of a New England Colonial farmhouse was built around 1803 by Watrous Peck, who was part of the post-Revolutionary westward migration of New Englanders seeking larger, more productive farmlands.

Waterloo Downtown Historic District, Waterloo – The historic core of the village reflects Waterloo’s transformation from pioneer settlement to a mill and manufacturing town to a commercial center between 1850 and1880 and the subsequent repurposing and updating of older buildings to maintain the village’s prominent status well into a new century.

First Methodist Episcopal Church of Walworth – Today known as the Walworth United Methodist Church, the building has since its construction in 1872 served as a landmark for the community as well as a gathering place for worship.

The Bridgehampton Presbyterian Church, Bridgehampton – Constructed in 1842, Federal/Greek Revival style is the third consecutive church building serving a congregation that was formed in the 1660s.

The Offerman Building, Brooklyn – Built in 1889-1893 on Fulton Street, the Romanesque Revival style department store was central to the development and success of Brooklyn’s retail district; its best known and most successful tenant was Martin’s Department Store, operating at the site from 1924 to 1979.

Silver Lake Cemetery, Staten Island – With burials dating to 1892, It is the first cemetery established by the Hebrew Free Burial Association, an organization dedicated to providing religious burial to members of the Jewish faith who did not belong to a burial society or synagogue.

Dollar Island Camp, Inlet – Among the oldest buildings in the town, the rustic Adirondack camp was by built in 1885 on the Fourth Lake island by a local guide and hotel keeper as a vacation home for a dentist from New Haven, Connecticut.

Henry’s Garage, Port Henry – Originally constructed in 1911 to meet the needs of a horse and automobile livery business, it was soon adapted to serve as an early automobile showroom, service garage and car storage facility.

Phillips-Manning House, Coventry – Built circa 1840, the highly intact Greek Revival-style house has served as home to members of two prominent families in the town’s history, namely the Phillips and Manning families.

Henry Whitney House, Whitney Point – The intact example of an Italianate-style farmhouse was built in 1855 by Henry Whitney, a member of one of the village’s founding families, and is the sole surviving feature from what was once a two-hundred-acre farm that remained active until the late 1960s.

Lakeview Avenue Historic District, Jamestown – The district encompasses 219 properties, primarily residences, stretched along what was once a rough rural road in the early nineteenth century, that was deliberately transformed into an elegant residential street.

Mentholatum Company Building, Buffalo –The four-story reinforced concrete daylight factory building was built in 1919, with later additions in 1947 and 1966, to serve as home of the Mentholatum Company, manufacturers of menthol-based health and beauty products.

St. Rose of Lima Roman Catholic Church Complex, Buffalo – The parish formed in 1926 to meet the demand of residents moving to the North Buffalo streetcar suburb, and built a new church in 1965 after the community grew rapidly in the post-World War II era.

St. Thomas Aquinas Parish, Buffalo – Formed in 1920, the parish includes a parochial school built in 1922, a rectory constructed in 1928, and a new larger church built in 1949 as the parish community continued to grow, which replaced the original church.

Niagara Power Project Historic District, Niagara County – Built between 1958 and 1969 by the Power Authority of the State of New York, the 2,589-acre feat of engineering replaced privately owned hydroelectric power plants and fundamentally changed the nature and scale of electricity production in Western New York.